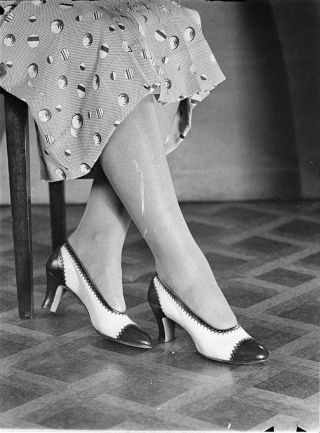 Should a sexual fixation on high heels land a person in the Diagnostic and Statistical Manual of Mental Disorders?
(Image: © State Library of New South Wales )

Should a sexual fixation on shoes or a predilection for pain land you in the psychiatrist's bible of diagnoses? Plenty of kinksters say no, but psychiatrists say yes — for now.

The newest Diagnostic and Statistical Manual of Mental Disorders, known as the DSM-5, is due out in May. The book sets the standard criteria for psychiatric diagnoses (not to mention health insurance reimbursement), making its pronouncements crucial to mental health treatment.

The exact wording of the new DSM is being kept under strict wraps until its publication. But proposed changes discussed online by the American Psychiatric Association researchers who worked on the new edition suggest that foot fetishists and bondage aficionados who hoped to get out of the book altogether won't see that wish come true.

Instead, unusual sexual fixations, or "paraphilias," will likely get their own category as odd, but not necessarily signs of mental illness. If, however, a person is distressed by a fetish — or if that fetish harms others — he or she will likely be eligible for a diagnosis of a "paraphilic disorder." [Hot Stuff? 10 Unusual Sexual Fixations]

"This was a way of saying it's OK to have a benign paraphilia," said Ray Blanchard, a psychiatrist at the University of Toronto and chair of the working group on sexual and gender identity disorders for the DSM-5. "That does not automatically give you a mental disorder."

Other psychiatrists argue that even leaving benign paraphilias in the DSM goes too far. Sexual fixations that cause harm and distress can be dealt with under other diagnoses, they say, ones that don't stigmatize people who enjoy non-mainstream but harmless sexual activities.

"I've heard people at meetings talk about 'those paraphiliacs,' 'those people,'" said Alan Shindel, an urologist and specialist in sexual problems at the University of California, Davis Health System. "I think that's always a dangerous road to go down when you're talking about othering people in that way."

Some psychiatrists and paraphilics even draw parallels between their position and that of gays and lesbians, who were considered mentally ill until homosexuality was removed from the DSM in 1974. [The History of Sex in the DSM]

Psychiatrists define paraphilias as unusual objects of sexual arousal, ranging from the mundane and typically harmless (foot fetishism) to the universally reviled (pedophilia, or attraction to children). The current DSM, the DSM-IV-TR, doesn't consider paraphilias problematic unless they cause distress to the self or harm to others.

The proposals and discussions posted online by the American Psychiatric Association suggest the new DSM will take that DSM-IV-TR qualification further, separating the notion of paraphilias from paraphilic disorders. Turned on by obscene phone calls or spanking? You've got a paraphilia. But unless your paraphilia is causing you some sort of dysfunction or distress, it's not a mental disorder, according to DSM-5. If the paraphilia does cause distress or harm, it becomes a paraphilic disorder.

The DSM-5 may also, for the first time, clearly define "paraphilia" (previous incarnations have simply listed odd sexual targets). Blanchard and his group proposed a definition describing paraphilia as "any intense and persistent sexual interest other than sexual interest in genital stimulation or preparatory fondling with phenotypically normal, consenting human partners between the ages of physical maturity and physical decline."

It's a definition that casts a wide net. In one study, published in 2011 in the Journal of Sexual Medicine, a whopping 62.4 percent of 40- to 79-year-olds in a German sample reported at least one sexual interest that would qualify as a paraphilia. About 60 percent of the time, men reported simply fantasizing about this unusual interest, but 44 percent had incorporated it into their actual sexual behavior.

In that study, researchers found the most common paraphilia was voyeurism (spying on an unknowing person), followed by fetishism (sexual fixation on a nonliving object). [The Sex Quiz: Myths, Taboos & Bizarre Facts]

A similar argument helped to oust homosexuality from the DSM. And many psychiatrists agree that the evidence for consensual paraphilias causing harm is lacking.

"There doesn't seem to be a lot of harm to someone having a preference that's unusual or different from what we consider mainstream," Shindel told LiveScience. Swapping out "paraphilic disorders" for "paraphilias" is a step in the right direction, Shindel told LiveScience, but the change leaves a lot of room for prejudiced psychologists to blame their clients' problems on their sexual fetishes.

"I think it's loosely applied and not really used the way it's supposed to be," Shindel said.

The framers of the DSM reject the claims of parallels. Not every sexual interest is comparable to homosexuality, Blanchard said.

The paraphilias should be evaluated on their own merits, Blanchard said, not by using homosexuality as some sort of "quasi-legal precedent."

Part of the challenge of classifying the paraphilias is that they range from undoubtedly harmful to benign. Sexual excitement over urine (urophilia) may seem icky to most people, but it's unlikely to hurt anyone. Similarly, many individuals consensually engage in sexual activities meant to inflict pain, such as spanking.

"The act of specifying particular, sexual behaviors as pathological leads to discrimination against all practitioners of those behaviors, even when their behavioral expressions are appropriate and benign," wrote psychiatrists Charles Moser and Peggy Kleinplatz in 2005 in the Journal of Psychology and Human Sexuality.

Limiting a diagnosis to those who are "distressed" is meant to get around this problem: If you're happy with your spanking fetish, you're fine.

But this distress criterion gets complicated when it comes to behaviors that harm others. Plenty of pedophiles experience no distress over their attraction to children. And frotterism (rubbing against unsuspecting people) and voyeurism (spying on unsuspecting people) involve nonconsenting people by definition. Thus, the new DSM will likely stipulate that even if paraphilias don't distress the individual, they do count as a mental illness if they cause harm to others.

The harm criterion skirts an oft-unspoken issue in psychiatry: When is something crazy, and when is it simply criminal?

It's a fundamental philosophical question the DSM doesn't handle well, said Pieter Adriaens, a philosopher of psychiatry at the University of Leuven, Belgium.

It's not clear why an action, but not an urge, should push someone into the realm of mental illness, Adriaens told LiveScience. Not every bizarre, illegal, immoral or otherwise horrible behavior gets its own mental disorder, no matter how much society disapproves, he said.

"Why is this not just criminal behavior?" Adriaens said of disorders such as pedophilia. "Why is this some other kind of harm than the harm involved with shooting someone? Why are we not considering every criminal to be mentally disordered?"

The problem gets to the heart of the issue surrounding paraphilias: It's hard to separate value judgments from what's considered "sick." This also applies to paraphilias that typically don't harm others: As long as mental illness remains tangled in cultural ideas about morality and right and wrong, handling sensitive subjects such as sexual desire will remain complicated.