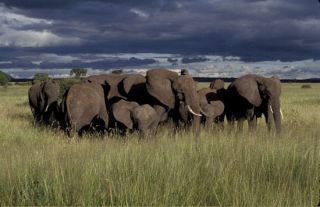 Elephants really do have a memory like, well, an elephant. Elephant matriarchs seem to retain memories of distant, life-sustaining sources of food and water, a new study suggests. These memories could be key to the survival of their family groups during lean times. "Understanding how elephants and other animal populations react to droughts will be a central component of wildlife management and conservation," said lead author of the study, Charles Foley, of the Wildlife Conservation Society (WCS). "Our findings seem to support the hypothesis that older females with knowledge of distant resources become crucial to the survival of herds during periods of extreme climatic events." The study examined patterns of calf mortality during the drought of 1993 in Tanzania's Tarangire National Park. The drought was the most severe in that region in the past 35 years. During a nine-month period of that year, 16 out of 81 elephant calves in the three groups studied died, a mortality rate of 20 percent. The normal mortality rate of calves during non-drought years is only 2 percent. Researchers noted correlations between calf survivorship, the movements of the groups, and in particular, the ages of the female members of the groups. The two groups that left the park during the drought suffered lower mortality rates than the one group that remained. Researchers think that the migrating groups found sufficient food and water outside of the protected area to keep themselves alive. The group that stayed suffered 63 percent of the mortality for the year. Also, the two groups that left the park had older mother elephants. (The group that remained had younger mothers as a result of heavy poaching in the 1970s and 80s that targeted older females and their larger tusks.) Researchers pointed out that the groups that left may have benefited from the experience of their oldest matriarchs, who could perhaps have drawn upon memories of earlier drought periods and how they survived them. Some of these matriarchs are known to have been at least 5 years old during a drought from 1958 to 1961, whereas the group that stayed behind had no elephants old enough to remember that event. "It's enticing to think that these old females and their memories of previous periods of trauma and survival would have meant all the difference," Foley said. "The data seem to support the speculation that the matriarchs with the necessary experience of such events were able to lead their groups to drought refugia." The researchers hope the study will underline the importance of protecting the leaders of elephant herds, as well as the vulnerability of the herds to increased drought brought about by climate change. The study was carried out by the WCS and the Zoological Society of London.