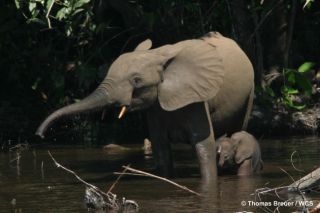 Roads that now penetrate into the heart of Africa’s jungles are making it easier for ivory poachers to kill large numbers of forest elephants, a new study finds.

The elephants that do survive are being forced to turn tail and retreat to protected parks and spots not yet encroached upon by humans.

The study, detailed in the current issue of the journal PLoS Biology, reveals that along roadways elephant numbers plummeted, which the authors say is largely due to heavy ivory poaching in these areas. There is a large, international black-market trade in the ivory from elephants' tusks.

“It is not the physical effect of the road that is the issue—forest elephants actually like roadside vegetation—rather it is the fact that unmanaged roads bring people, with their guns and ammunition,” Blake said.

Blake and his colleagues surveyed on foot more than 3,700 miles of landscape in five African countries. They counted dung piles to tally individual forest elephants and counted elephant carcasses with obvious signs of poaching (missing ivory tusks, for example) to calculate the illegal killing rates.

They located 53 poaching camps and 41 elephant carcasses, among which they confirmed 27 were the result of poaching.

In general, they found fewer forest elephants and more poached elephant carcasses close to roads. Elephant numbers increased the greater the distance from a road the scientists surveyed. They found no poached carcasses beyond about 28 miles from a highway.

National parks in the area were places of refuge for the elephants, as the land behemoths scrambled for any corner in the forest safe from poachers. Even in protected areas with road access, the scientists recorded an increase in elephants and a drop-off of poached carcasses compared with other roadside spots.

In the largest forested national park in Africa, Salonga National Park, the researchers tallied as few as 1,900 elephants, which they attribute to the roads and navigable rivers that crisscross the park. The most remote parks, Minkébé and Odzala-Koukoua, showed 10 times the elephant density of Salonga. These two parks lie more than 37 miles from the nearest roads.

These safe havens will be even more critical to the elephants’ survival, the scientists say, as roads increasingly penetrate into Africa’s unprotected jungles.

Between 1970 and 1989, half of Africa’s elephants (or about 700,000 individuals) were killed, mostly for their ivory tusks. The extreme decline spurred the Convention on the International Trade of Endangered Species of Wild Flora and Fauna (CITES) to list African elephants and thus ban the international ivory trade. Currently, debate over repealing or modifying the ban has been the focus of CITES conferences. The ban was effective at protecting elephants at first, but it is largely unenforced now because governments have withdrawn funding for it.

The authors of the present study suggest that an informed debate and resolution on the matter relies fundamentally on a clear understanding of the size and trends in elephant populations along with the rates of illegal killing for ivory across Africa.

“We have shown that even with a near-universal ban of the trade in ivory in place, forest elephant range and numbers are in serious decline,” the authors state in the journal article.