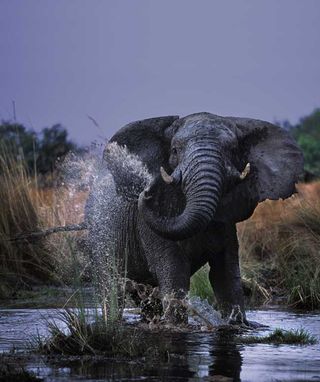 The illegal trade in elephant ivory is growing again at an alarming pace due to organized crime, but new research estimating the geographic origin of "the Singapore seizure," 6.5 tons of contraband tusks, points to a plan to prevent African pachyderm extinction.

Elephants [image] are hunted for their meat and their tusks--a business that has become especially lucrative in the past few years.

Up to 5 percent of Africa's population of elephants [image] was killed by poachers for the year ending in August 2006, said University of Washington biologist Samuel Wasser. That amounted to more than 23,000 elephants, which yielded an estimated 240 tons of ivory.

A kilogram of high-quality ivory sold for $200 on the black market in 2004, but the price tag for that quantity ballooned to $750 last year, Wasser said.

The tusks are sought after in some Asian countries, sometimes in the form of hankos, round cylinders of ivory on which some communities in China and Japan carve their personal seal for use as a prestigious signature stamp. The creamy tusks also are used to carve cane and knife handles and other small objects.

The price of high-quality ivory has created a black market, with commodity speculators driving poaching to never-before-seen levels, Wasser said.

"This is serious business, and if we don't open our eyes to the problem, we can kiss our elephants goodbye," he said.

In fact, elephants have been poached to extinction already in Senegal and to near extinction in Guinea-Bissau, said Sergios-Orestis Kolokotronis, a biologist at Columbia University.

About five years ago, investigators got a tip concerning a shipping container in Malawi and destined for Singapore, packed with ivory that came from between 3,000 and 6,500 elephants. Wildlife agents intercepted the Singapore seizure [image] under a 1989 trade ban. The 42,000 hankos alone in the shipment were worth about $8.4 million, and the tusks weighed an average of 24.25 pounds (11 kilograms) apiece, more than twice the typical weight, indicating they came from older elephants.

Many agents assumed that the Singapore seizure, the largest illegal ivory seizure since the 1989 ban and the second largest seizure ever, came from forest elephants living all over Africa, but no one was sure. So Wasser and his colleagues worked with Interpol and other enforcement agencies and applied a technique that allows him to match DNA from the tusks to a map he made a few years ago of where elephants with specific genetic variations live in Africa.

The key to poaching prevention for African elephants lies in enforcement of a 1989 international trade ban which was highly effective immediately after it was enacted, but is no longer because governments withdrew funding for its enforcement, Wasser said.

Elephants live in numerous African countries, in savannah and forest environments, so investigators can do better enforcement if they know of poaching trade routes and where activity is high. Three of the largest seizures of ivory after the 1989 ban happened in 2002, and some nations such as Zimbabwe, Botswana, Namibia and South Africa have received suspensions of the ban.

The ivory in the Singapore seizure came from elephants living in an east-west swath centered on Zambia and possibly including parts of Mozambique and Angola, Wasser and his colleagues wrote in the latest issue of the journal Proceedings of the National Academy of Sciences. Their results are based on an analysis of 67 tusks from the 532 seized in Singapore and demonstrates that the elephants were savannah dwellers, not forest elephants like those found in the Democratic Republic of Congo, Congo, Gabon, Central African Republic and Cameroon.

Now that enforcement knows where to concentrate, Wasser and his colleagues are calling for a strategic reinstatement of the strong enforcement that nearly shut down the trade in elephant tusks just after 1989. Poor countries like Zambia need enforcement support from the United Nations and other governments, he said.

"If this does not happen, elephants will soon be gone over most of Africa, and especially in the forests of Africa," Wasser told LiveScience. "We stopped poaching once and can do it again. We just have to avoid repeating past mistakes."

Countries such as Ghana and Mali present promising cases for elephant conservation, as their populations are not at the brink of extinction yet and conservation efforts there seem to be working, said Kolokotronis.

The situation is complicated because even though there are larger populations of elephants in regions such as southern Africa (more than 250,000 individuals), more of the genetic diversity among elephants is found in western and central Africa where poaching tends to go unchecked and populations of forest and savanna elephants are in peril, Kolokotronis said.

No one will likely ever be prosecuted for the Singapore seizure because there is too much money involved and too many people willing to accept it, Wasser says.

"People also fear for their lives," he said.

Elephants are more than the largest living land animals. They also create a continuous natural disturbance in habitats that other species have evolved to depend upon, Wasser said. And elephants help to control the amount of woodland and are key to the dispersal of plant seeds.