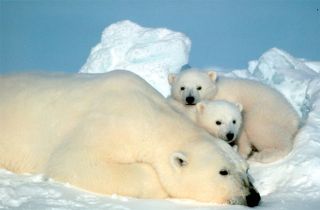 Although many of Earth's largest animals are endangered, it's not too late to take steps to prevent elephants or polar bears from going the way of the mammoth and other big beasts that died out.

Conservation efforts have already helped some species rebound from the brink of extinction.

And a 2005 study by researchers at the Imperial College of London has suggested specific methods to help conserve large mammals. While small animals might benefit from habitat conservation, large mammals require a species-specific approach, targeting both the animal's biology and its habitat, the researchers say.

Large animals tend to reproduce at a relatively slow pace, which may have contributed to the extinction of mammoths and other big mammals during the Pleistocene/Holocene die-off from 50,000 to 10,000 years ago.

So species such as rhinos, zebras and primates are evolutionarily disadvantaged in the face of human impact, and need special conservation attention.

"I think the take-home message from the Pleistocene is that species are resilient but there can be a breaking point where a species cannot recover and when that point is reached, a complete collapse and loss can occur rapidly," said zoologist Alex Greenwood of Old Dominion University. "Dozens of species of large mammals were wiped out in a short time, so there is a danger that we could lose our large mammals in a similarly short period of time if we are not careful."