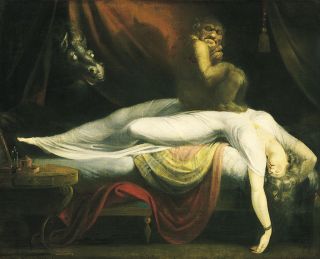 Henry Fuseli's "The Nightmare" may have been inspired by the chest-crushing sensation and hallucinations of sleep paralysis.
(Image: © Henry Fuseli (1781))

Imagine waking up to find you can't move a muscle. It's dark, but you're sure you feel a presence in the room, hovering near your bed — or perhaps sitting on your chest, crushing the breath out of you.

This weird phenomenon is known as sleep paralysis, and a new study finds that understanding why it happens helps people feel less distressed after an episode. Believing that sleep paralysis is brought on by the supernatural, on the other hand, makes people feel more unnerved.

Sleep paralysis occurs when the brain and body aren't quite on the same page when it comes to sleep. During rapid eye movement (REM) sleep, dreaming is frequent, but the body's muscles are relaxed to the point of paralysis, perhaps to keep people from acting out their dreams. Researchers have found that two brain chemicals, glycine and GABA, are responsible for this muscle paralysis.

Estimates of how many people experience sleep paralysis vary from 5 percent to 60 percent, likely because of differences in survey methods. Some people find themselves experiencing sleep paralysis frequently, while others wake up paralyzed only once or twice in their lifetimes. The good news is that sleep paralysis is ultimately considered harmless.

Becoming mentally aware before the body "wakes up" from its paralyzed state can be a terrifying experience, as people realize they can't move or speak. Frequently, these episodes are accompanied by hallucinations and the sensation of breathlessness. Such hallucinations likely gave rise to the myths of the incubus and the succubus, demons that pin people down in their sleep (and sometimes have sex with them).

People may also sense a malevolent presence nearby or believe they are about to die. Some sleep paralysis episodes come with feelings of falling, floating or dissociating from the body.

These sensory experiences are more likely to distress people than mere paralysis alone, according to the study published online in February in the journal Clinical Psychological Science.

Researchers James Cheyne and Gordon Pennycook of the University of Waterloo in Canada surveyed 293 people, mostly women, on their experiences with sleep paralysis. They found that people were most distressed after an episode when hallucinations felt threatening and when they held supernatural beliefs regarding the cause of the paralysis.

People with analytical thinking styles were less likely to hold such supernatural beliefs, and were less likely to be distressed after experiencing sleep paralysis, the study found. Though the study couldn't pin down the causal relationship, analytical thinkers may be more likely to seek out and believe naturalistic or scientific explanations for the condition, the researchers wrote, while intuitive thinkers might be drawn to supernatural explanations.

"These results suggest that it is not only important for clinicians to be aware of the implications of supernatural beliefs on SP [sleep paralysis] distress but also sensitive to the likelihood that not everyone will accept or experience relief from naturalistic interpretations," the researchers wrote.

The online survey drew from a self-selected, rather than random, sample and relied on self-report, the researchers wrote. But allowing respondents to tell their stories can be important, they wrote, because patients complain that their doctors often dismiss the very real fear they feel when they wake up paralyzed.