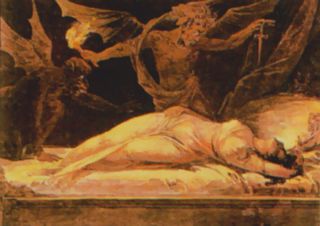 If you've ever woken up in the middle of the night feeling as though you're being crushed by a demonic being, you may have just experienced what's called the incubus phenomenon: an "attack" by a male demon. (Its female counterpart, the succubus, usually attacks men.)

The phenomenon is, in many ways, the quintessential nightmare. For centuries, the incubus demon has been said to haunt sleepers, inspiring tales in traditional folklore as well as works of art.

Now, a new meta-analysis from the Netherlands suggests that this frightening phenomenon may be more common than previously thought — and that it should be taken more seriously by psychiatrists and psychologists who hear such accounts from their patients. [Top 11 Spooky Sleep Disorders]

The so-called attack usually occurs during an episode of sleep paralysis, a condition that's even more common than the incubus phenomenon, according to the meta-analysis.

Sleep paralysis is a result of the dissociation of sleep phases, said senior author Dr. Jan Dirk Blom,a professor of clinical psychopathology at the University of Leiden in the Netherlands.The condition happens when a person is falling asleep or waking up. During sleep paralysis, two aspects of REM sleep, or rapid eye movement sleep, occur when a person is conscious.

During REM sleep, which is the period when a person typically dreams, the body's muscles are relaxed to the level of paralysis, presumably to prevent the sleeper from acting out his or her dreams, Blom said. But when sleep paralysis takes place, the person's mind wakes up — however, the person is still dreaming, and the body is still paralyzed.

"Lying in bed in such a state of paralysis, the brain's threat-activated vigilance system kicks in and helps to create a compound hallucination of a creature sitting on the chest," Blom told Live Science.

What the afflicted person sees is a combination of their actual surroundings and a nightmare, which is projected onto the real world. The experience feels exceptionally real, Blom said.

In the meta-analysis, which was published in November in the journal Frontiers in Psychiatry, the researchers looked at 13 studies of the incubus phenomenon that included nearly 1,800 people. The different studies came from various countries, including Canada, the United States, China, Japan, Italy and Mexico.

But in certain groups, the odds of "encountering" an incubus are higher. Among people with psychiatric disorders, as well as among refugees and — somewhat surprisingly — students, the odds of experiencing the incubus phenomenon are as high as 41 percent, Blom said.

Though the frightening experience gets frequently dismissed as "just a bad dream," Blom noted that the incubus phenomenon can lead to additional problems, including anxiety, difficulty sleeping due to fear and even delusional disorder, a mental illness akin to schizophrenia.

In the paper, the researchers speculated about a possible link between the incubus phenomenon and sudden unexpected death syndrome, a situation in which a healthy person inexplicably dies in his or her sleep.

"People who have experienced the incubus phenomenon often report a level of anxiety that is 'off the scale,'" Blom said. "Many of them have the feeling that they will actually die during an attack. Whether that ever happens is unknown, even though for a person experiencing it, it is not hard to imagine this [happening]."

The analysis also found that the form of the incubus figure and how people react to it can vary based on the person's cultural background.

For example, "patients with Muslim background often tell me that they see the incubus phenomenon as a proof that they are being haunted by a jinn, an invisible spirit created by Allah out of smokeless fire," Blom said.

Sometimes, however, the incubus may take on a much more friendly and entertaining form.

"I recently spoke to a healthy 15-year-old girl who had experienced the incubus phenomenon," Blom said.  "She found four miniature penguins dining at a table on her chest, and had been thrilled and amused rather than scared."