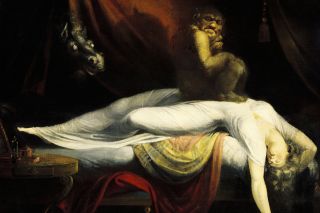 Have you ever dozed off for a 30-minute nap and woken up with a demon perched on your chest, pinning you to your bed?

English folklore once dubbed such nocturnal visitations as simply "nightmares." Today, however, the phenomenon is called sleep paralysis — or being mentally aware while falling asleep or waking up, yet totally unable to move. These episodes may last only a few minutes but can include disquieting side effects such as an intense pressure felt on the sleeper's chest, the sensation of being watched by an intruder and other sensory hallucinations.

Though scientists have an understanding of what happens during sleep paralysis, the cause of the condition remains unclear.

So, in a recent review of studies, published in June in the journal Sleep Medicine Reviews, Gregory and her colleagues analyzed 42 sleep paralysis studies to determine the most common characteristics linked with the mysterious condition. In the review, the researchers compared the frequency of sleep paralysis episodes with dozens of variables, including age, sex, ethnicity, diet, income, caffeine intake, genetics, past stress, "hypnotizability" and IQ.

Many of these factors showed negligible or inconclusive links, but there was little doubt that poor sleep quality was associated with sleep paralysis episodes. Broadly speaking, the less restful a person's sleep was, the more likely they were to experience sleep paralysis, the review found.

"Overall, it seems that certain factors associated with disrupted sleep are also linked to sleep paralysis," Gregory said. "For example, disturbed sleep is common amongst those who use substances[drugs], experience stress and report psychiatric difficulties."

Across multiple studies, individuals who woke up repeatedly during the night were significantly more likely to experience paralysis episodes than sound sleepers were. In several studies that looked at sleep duration, individuals who slept for less than 6 hours or more than 9 hours at a time were most likely to experience sleep paralysis upon waking. Napping was also linked to increased chances of sleep paralysis episodes.

"This makes sense when we think about the likely mechanisms underlying sleep paralysis," Gregory said, which occurs when a person is essentially caught between REM sleep and wakefulness.

"It could be that stress causes sleep paralysis, but equally that sleep paralysis leads to stress," Gregory said. "We couldn't really tease apart cause and effect." Future long-term studies will help clarify what comes first: sleep problems or anxiety, she added.

The truth is out there?