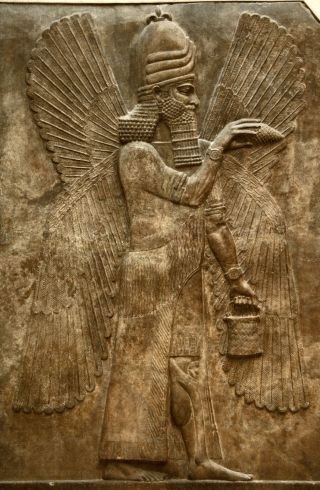 Detail of a relief showing a winged genie (jinn), from the palace of Assyrian king Sargon II, 722-705 B.C. Belief in genies has roots in Mesopotamian legends.
(Image: © Prisma/Newscom)

Genies (or jinn, as they are better known in the Arabic world) are supernatural beings with roots in ancient Mesopotamian legends. Jinn, however, are not the lamp-dwelling, wish-granting benevolent servants that Westerners know from popular culture.

The image that most Americans probably have of genies comes from the 1960s sitcom "I Dream of Jeannie" or the animated big blue Robin Williams-voiced wiseacre in Disney's "Aladdin." More recently, in the television adaptation of Neil Gaiman's 2001 novel "American Gods," audiences have come to know a cab-driving jinn who switches identities with an Omani salesman named Salim. (Salim had recognized the jinn from a story told to him by his grandmother).

Gaiman's magical, shape-shifting jinn is fictional, but belief in genies is widespread. In "Legends of the Fire Spirits: Jinn and Genies from Arabia to Zanzibar" (Counterpoint Books, 2011), researcher Robert Lebling noted that "Jinn are taken seriously and regarded as real, tangible beings by a large segment of the world's population.... They often appear humanoid or even human but possess amazing powers we lack. They can change their shapes, can fly through the air, and even can render themselves invisible." (Lebling is also the creator of a Facebook page titled The Jinn Group, where members share jinn stories and lore.)

Many ancient Mesopotamian demons and wind spirits were precursors to the jinn; Pazuzu is probably the most famous of them, thanks to its appearance in William Peter Blatty's novel "The Exorcist" and the classic film of the same name. Though belief in jinn predates the creation of Islam, the creatures are referenced in the Quran, the Muslim holy book — not as metaphors but instead as real entities whose existence is taken for granted. The Quran states that Allah created three types of beings from three substances: humans (made of earth); angels (made of light); and jinn (made of smokeless fire). There are said to be five categories of jinn; two of the best known are shaitan and ifrit, both of which are said to be evil.

Considered wind and fire spirits by Muslims, jinn are invisible to humans in their pure form but can take any form they please to suit their needs. Jinn, just like people, can be good or evil; they are born, grow up, marry, have jobs, raise families, live in their own communities and die, just like us.

In contrast to Western versions of jinn, in the Arab world they are not known for their "Aladdin"-like wish-granting — though they can be commanded to perform tasks by wizards, for example, or someone who wears the magical Ring of Solomon.

Jinn are sometimes blamed for unexplained minor health scares, accidents and misfortune. For example, in 2000, teachers at an all-girls school in the Saudi Arabian city of Jeddah began having mysterious fits and seizures. Though doctors attributed that incident to mass hysteria (a mild and harmless form of social contagion and psychological suggestion), many believed that jinn haunted the school and were to blame for the attack. In May 2015, nine elementary and middle school students at a girls' school in southern Madinah, Saudi Arabia, claimed that jinns had made them feel unwell, causing episodes of fainting and spasms. Nearly 200 of their classmates refused to attend the school for two days while medical authorities searched for an explanation.

Belief in the fire spirits is also common among elected officials in the Middle East. In 2011, nearly two dozen associates of Iranian President Mahmoud Ahmadinejad were accused of summoning jinn to attack political enemies. One man, Abbas Ghaffari, was reportedly accused of summoning a genie who caused a heart attack in one of Ghaffari's rivals.

Like spirits and demons, jinn are said to be able to possess humans (with similar symptoms, including seizures, violence and speaking unknown tongues) and can be exorcised from the human body through rituals. Just as in Catholic exorcism rituals where Bible passages are read to the possessed person to drive the spirit from the human body, Islamic rituals often involve having sections of the Quran recited to the afflicted person to rid him or her of jinn.

Jinn are believed, like ghosts, to sometimes haunt buildings, homes and other locations, including sewers and drain pipes. Jinn are said to be repelled by salt and iron — a characteristic they share with vampires. As with many magical creatures around the world, stories of jinn are often told in the form of a boogeyman story. Children are warned to obey their parents and not to stray from the beaten path. Some jinn live in remote, wild places, and are said to lure children and unwary travelers to their doom — a trait shared with fairies of the British Isles, the Hispanic ghost-witch La Llorona and others.

In some places jinn are so feared that merely calling them by their name risks retribution, so euphemisms are used instead. This also has parallels to fairy folklore, in which the capricious creatures are often called "the fine folk" or "wee folk" to avoid offense. Whether jinn exist or not is less important than the fact that many people believe that they do. Legends of these fire spirits, like those of angels, fairies and ghosts, will always be with us.