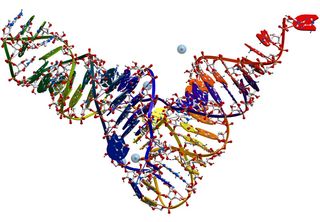 Scientists have found the human genome can generate circular RNA structures that may interfere with genetic activity. (RNA, shown here, is similar to DNA and can carry genetic information.)
(Image: © Leonid Andronov | Shutterstock)

The human genome can generate molecular hoops similar in makeup to DNA that could potently interfere with genetic activity, researchers say.

These findings reveal there are secrets within the genomes of humans and other animals that scientists are still uncovering, and the old belief that life has useless junk DNA is more false than ever, scientists added.

Discovering more about circular versions of RNA (a molecule similar to DNA that can carry genetic information) could also lead to new ways of fighting diseases such as diabetes, brain tumors and Parkinson's disease, investigators added.

The human genome — the blueprint for human life — is made of DNA. From the genome, intermediate molecules known as RNA are created that help manufacture key biomolecules such as proteins, which then carry out cellular processes.

After international teams of researchers completely sequenced the human genome, they found about 95 percent of it unexpectedly did not code for proteins. Since this noncoding DNA initially seemed to have no known biological function, some scientists referred to it as junk DNA. [Unraveling the Human Genome: 6 Molecular Milestones]

However, over time, researchers have discovered this noncoding DNA can serve a wide variety of vital purposes. For instance, noncoding DNA can give rise to snippets of RNA known as micro-RNA that can suppress the so-called messenger RNA that normally helps manufacture proteins. This micro-RNA serves a key role in controlling genetic activity, and scientists are developing therapies based on micro-RNA to dampen harmful, malfunctioning genes.

Now researchers find the genomes of humans and other animals can generate circular RNA, highly stable rings that can sponge up micro-RNA, apparently keeping them from interfering with genetic activity if necessary.

"There seems to be a whole new layer of gene regulation," researcher Jørgen Kjems, a molecular biologist at Aarhus University in Denmark, told LiveScience.

For instance, Kjems and his colleagues found high levels of a circular RNA they dubbed ciRS-7 in the human and mouse brain. This molecule potently suppresses a micro-RNA named miR-7, which is found in everything from worms to humans. They also found a circular RNA known as Sry that is specific to testicles and targets a micro-RNA known as miR-138, suggesting that circular RNA might play a role in sex development.

In addition, when Nikolaus Rajewsky at the Max Delbrück Center for Molecular Medicine in Berlin and his colleagues analyzed human, mouse and nematode worm RNA, they detected thousands of circular RNAs. These were often linked with specific tissues or developmental stages.

The micro-RNA miR-7 regulates a number of disease genes, including Parkinson's disease, brain tumors and diabetes. As such, learning more about circular RNAs "may provide a new treatment strategy for these diseases," Kjems said. Regulating the activity of miR-7 could reduce the activity of the genes causing these diseases, he explained.

Altogether, these findings suggest that circular RNAs form a large class of genetic regulators. It remains uncertain whether these molecules work alone or whether they act by combining with other compounds, such as RNA-binding proteins.

The researchers next plan to introduce these circular molecules in animals "to see their effect on disease development, and from there, design drugs towards the diseases," Kjems said.

The scientists detailed their findings in the Feb. 28 issue of the journal Nature.