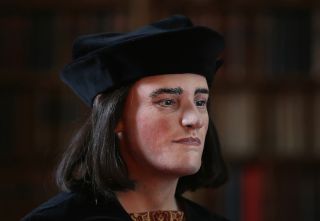 A new facial reconstruction of King Richard III, based on the bones unearthed beneath a parking lot in Leicester, England, show the vilified monarch in a kinder, gentler light.
(Image: © copyright Richard III Society)

William Shakespeare immortalized King Richard III as a villainous, sneering hunchback. But a new facial reconstruction of the skull of the rediscovered monarch has some people viewing him in a kinder, gentler light.

"It's an interesting face, younger and fuller than we have been used to seeing, less careworn, and with the hint of a smile," said Phil Stone, the chairman of the Richard III Society, which has been part of a recent effort with the University of Leicester to unearth and identify the remains of the lost king.

But facial reconstructions, even well-done ones, can be misleading. For example, bones tell scientists nothing about the size of someone's ears, how many forehead wrinkles they had, or whether they often smiled or habitually wore a frown.

"The reconstruction is a combination of science, history and art," said Kristina Killgrove, an anthropologist at the University of West Florida who was not involved in the research. "It likely bears a great resemblance to Richard III, but it's not his 'real' face the way we would think of a photograph representing a person's visage." [See Images of Richard III's Face and Skull]

Richard III enthusiasts have reason to want to rehabilitate their beloved king's image. After his death in the Battle of Bosworth Field in 1485, the king was reportedly stripped and beaten before a hasty burial in Leicester. The archaeological evidence — a battered skeleton shoved into a poorly dug grave — backs up this tale. The skeleton was identified as Richard III's because of its location, age, wounds and DNA links to modern descendents of the king.

Richard III came to power in 1483 after declaring his nephews, sons of the previous king, illegitimate. The two young boys were never seen in public again, fueling rumors that Richard had them killed. And then there was Shakespeare. The playwright penned the tragedy "Richard III" a century after the monarch's death, portraying him as a scheming hunchback, "deformed, unfinish'd" and "determined to prove a villain." [8 Grisly Archaeological Discoveries]

Richard III's skeleton reveals that he did have scoliosis, a curvature of the spine that would not have formed a hunchback, but would have left him looking somewhat asymmetrical. Wounds to the buttocks also suggest that his body was stripped of armor and abused after death. But the rumors of murder and treachery are harder to support. The Tudors, the royal house that defeated Richard III and took over the monarchy after him, had political reasons to vilify their slain enemy, and some of the stories may have been propaganda.

Face out of history

From a historical sense, the facial reconstruction sheds little light on Richard III as a good or bad guy. Appearances can be deceiving, after all, and the lack of wrinkles and tranquil expression are artistic choices by Janice Aitken, a lecturer at the Duncan of Jordanstone College of Art & Design of the University of Dundee, who painted the 3D replica of the reconstruction.

"My part in the process was purely interpretive rather than scientific," Aitken said in a statement, adding, "I drew on my experience in portrait painting, using a combination of historical and contemporary references to create a finished surface texture."

The face shape and structure, however, is based on strong science. To reconstruct faces, forensic scientists look for features on the skull bones that indicate where muscles would attach. Other clues to outward looks include the size and prominence of the teeth and the the width of the nasal opening and the size and shape of the cheekbones, said Caroline Wilkinson, the University of Dundee researcher who led the Richard III reconstruction project.

"I'm not sure that this reconstruction tells us anything about him as a person in terms of his chracter, but it may help in some way to expel some of those myths, mostly perpetuated by Shakespeare, as to his kind of 'monster' appearance," Wilkinson told LiveScience. The researchers did include Richard III's scoliosis on the bust, building one shoulder higher than the other.

One of the oldest techniques of facial modeling involves physically putting clay on the skull (or a cast of the skull), using averages from real faces to determine how thick the flesh would likely be. The method can work, Killgrove told LiveScience, "but often looks like a craft project."

Newer techniques involve precise measurements and computer modeling, Killgrove said. In the case of Richard III, Wilkinson and her colleagues used computed tomography (CT) scans of the battle-scarred skull and stereolithography, a type of 3D printing, to create a lifelike bust of the medieval king. The bust is set to be displayed in a planned visitor's center at the site of Richard III's burial in Leicester.

Whether or not the man in the bust has the same forehead wrinkles or precise skin tone as the real Richard III, reconstructions can draw people in to history and humanize the past, Killgrove said. For Philippa Langley, a screenwriter and Richard III Society secretary who helped push archaeologists to search for the king's bones, the new bust had that effect.

"Seeing a true likeness of England's last Plantagenet and warrior king meant, for me, finally coming face-to-face with the man I'd invested four years searching for," Langley said in a statement. "The experience was breathtaking — one of the most overwhelming moments of my life. I wasn't alone in finding this an approachable, kindly face, almost inviting conversation. Perhaps I may be forgiven for adding a personal impression of loyalty and steadfastness, someone seemingly capable of deep thought."