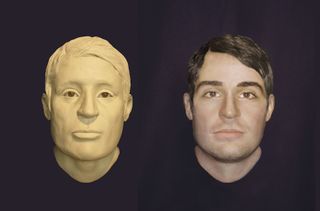 A facial reconstruction of a young Civil War sailor who died in the wreck of the USS Monitor.
(Image: © Louisiana State University)

The faces of two Civil War sailors who died when their ironclad warship sank 150 years ago are now visible, thanks to the science of forensic reconstruction.

The two men were part of the crew of the USS Monitor, the Navy's first ironclad warship. The ship went down in a storm off Cape Hatteras, N.C., on Dec. 31, 1862, while it was being towed. In 2002, the  Navy and the National Oceanic and Atmospheric Administration joined forces to recover the ship's gun turret, which contained two nearly complete skeletons of two men lost in the shipwreck.

Sixteen men died when the Monitor went down, and none of the remains of the other 14 casualties was ever found. To find out who died in the gun turret, forensic anthropologists at Louisiana State University volunteered to reconstruct the men's faces from their skeletal remains using clay reconstruction techniques as well as computer modeling. Now NOAA is hoping someone in the public will recognize the men as ancestors and come forward to identify them. [Album: Faces of the Civil War]

"Our job is to not only protect and preserve our naval history but to make it come alive to our sailors and the public," retired Rear Adm. Jay A. DeLoach, head of the Naval History & Heritage Command, said in a statement. "The fusion of science, technology and history has breathed life into our shipmates, and we are very proud of the legacy we have inherited from the sailors of the USS Monitor."

The remains reveal that one of the men was between 17 and 24 years old and about 5 feet, 7 inches tall, with good teeth. The other man stood 5 feet, 6 inches and was likely between 30 and 40 years old. He probably smoked a pipe. Both men were white.

The reconstructions reveal one young man with a handsome face, perhaps with a passing resemblance to a young Robert DeNiro. The other man has a broader face, with close-set eyes and a prominent nose.

Researchers who have worked closely with the Monitor recovery efforts described the experience of seeing the facial reconstructions in emotional terms.

"When Navy divers discovered the human remains in Monitor's turret, they immediately began referring to them as 'our shipmates,'" retired NOAA archaeologist John Broadwater, who has authored a book about the ship, said in a statement. "Looking into these two faces is very moving for me and, I'm certain, for everyone involved in the Monitor recovery operations."