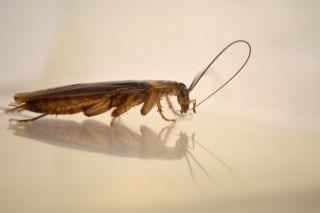 Perhaps Fluffy the cat let roaches and other insects in on a little secret about cleanliness: Turns out, the creepy crawlies incessantly groom themselves to keep their antennae free from environmental pollutants and chemicals the insects themselves produce, a new study shows.

The catlike bathing removes debris in order to keep insects' sense of smell sharp for finding food and mates and sensing danger, the researchers report today (Feb. 4) in the journal Proceedings of the National Academy of Sciences.

"The evidence is strong: Grooming is necessary to keep these foreign and native substances at a particular level," said study co-author Coby Schal, an entomologist at North Carolina State University, in a statement. "Leaving antennae dirty essentially blinds insects to their environment."

Though animals from mammals to insects are known to groom themselves, exactly why insects such as cockroaches do so remained a mystery. [Grooming Gallery: Chimps Get Social]

To investigate the phenomenon, Schal and his colleagues compared the antennae of cleaned American cockroaches with those on cockroaches prevented from grooming. Normally, the bugs use their forelegs to shove their antennae into their mouths, and then systematically lick from top to bottom.

In the experiment, when antennae got dirty, they accumulated both environmental chemicals and a waxy substance that the giant insects secrete to stay hydrated.

By contrast, when insects were able to clean themselves, the action uncovered tiny pores on the antennae that allow sensory chemicals to travel to olfactory nerves, letting the cockroaches smell key chemical signals.

When the researchers exposed both groups of cockroaches to sex pheromones, or chemicals used by the insects to communicate about mating, scientists found the clean antennae could better detect the mating chemical than could dirty ones.

The team then subjected carpenter ants, German cockroaches and houseflies to similar experiments and found that all of the insects' antennae accumulated debris that could impair their senses of smell. (Carpenter ants rub their legs over their antennae to clean the organs.)

The findings could help in the design of better insecticides against the creepy crawlies. Many existing insecticides must slowly seep through insects' waxy outer cuticles. But because cockroaches constantly lick their antennae, a mist that settles onto these organs could cause the bugs to eat the poison very quickly, the researchers suggest.