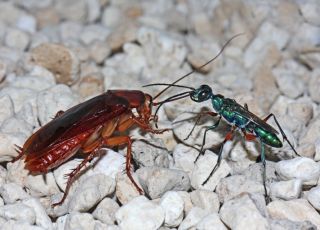 Female of the emerald cockroach wasp Ampulex compressa manipulating an American cockroach, which has been made docile by wasp venom and that will serve as food for the wasp larva.
(Image: © Gudrun Herzner)

If cockroaches had nightmares, the emerald cockroach wasp surely would deserve a prominent place therein.

These colorful, tiny parasitic wasps sting American cockroaches twice, once in the midsection to prevent them from running away, and a second time directly in the brain, to make the insects sluggish and zombielike. The wasps then drag the roaches by their antenna, akin to a human pulling a dog on a leash, into a protected nook and lay an egg on the roach. The egg ultimately hatches into larvae that devour the roach from the inside out.

About six weeks later, a young adult wasp emerges after spinning a cocoon inside the shell of the roach. But there's a catch: What's to prevent the cockroach "meat" from spoiling? Cockroaches are notoriously dirty animals, covered in bacteria that begin to spoil their flesh — and threaten to harm larval wasps — during this long incubation period.

A study published today (Jan. 7) in the journal the Proceedings of the National Academy of Sciences found that these larval wasps secrete a surprising amount of potent antimicrobial compounds to prevent their cockroach bounty from spoiling. [Mind Control: Gallery of Zombie Ants]

"They virtually soak their cockroach host with the secretion to inhibit the growth of competitive microbes that would degrade their food and of pathogenic microbes that threaten their lives," said study co-author Gudrun Herzner, a researcher at Germany's University of Regensburg.

The study found that Ampulex compressa larvae secrete several types of antibiotics, specifically the chemicals mellein and micromolide, which inhibit the growth of bacteria, fungi and viruses, Herzner told LiveScience.

"On the one hand, the finding is surprising, because such a simple, little insect larva uses such a sophisticated strategy to ward off detrimental bacteria," Herzner said. "The larvae are like little chemical plants that produce large amounts of different antimicrobial substances."

However, she continued, it was not really a surprise to find that these parasitic wasps would have evolved to secrete some antimicrobial substances, given that the cockroach is the young wasp's only food source, which would by itself spoil if not somehow preserved. The wasps live throughout the tropical regions of Africa, Asia and the Pacific.

This is not the only example of insects producing antimicrobial compounds. The European beewolf wasp hunts honeybees, and coats their bodies in an oily substance that inhibits microbes from growing. Certain types of burying beetles also disinfect the carrion they use as larval food. But in both of these cases, the adult animal secretes the antimicrobial chemicals; the emerald cockroach wasp is a rare example of a larval insect making antibiotics, Herzner said.