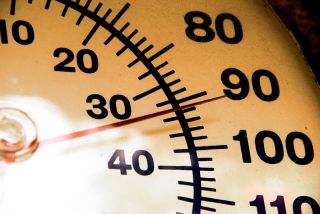 A day after the mercury reached 106 degrees Fahrenheit in Melbourne, the extreme heat pushed into Sydney on Friday, leading to the hottest day on record for the capital of New South Wales.

The population of over 4.5 million suffered through the scorching heat that peaked at 114.4 degrees Fahrenheit (45.8 degrees Celsius) at the Observatory Hill. This broke the previous all time high of 113.5 degrees F (45.3 degrees C) set in 1939. The temperature rose even higher, reaching 115.5 degrees F (46.4 degrees C) at Sydney Airport.

The heat was followed by strong wind gusts over 50 mph that arrived during the evening hours along with some overnight rainfall.

Cooler weather is expected for the weekend along with the threat for a shower or thunderstorm each day.

The combination of sweltering heat and strong winds have led to numerous wildfires across both New South Wales and neighboring Victoria.

The first confirmed fatality from the wildfires was reported on Friday as a man was found burned to death in an automobile.

Firefighters battling the blazes have endured extreme heat making the the fight even more dangerous. Several firefighters have had to receive medical attention due to heat and exhaustion.

Some rainfall is expected from the weekend into early next week across portions of New South Wales and eastern Victoria, but amounts are not expected to be significant enough to dampen out wildfires which could rage in some areas for weeks.