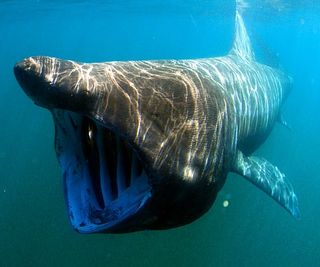 Imagine a great white shark with the nose of the Elephant Man. That's the fearsome mug of a basking shark, yet these massive plankton-eaters are harmless to people.

For decades, scientists thought basking sharks were also homebodies, staying close to their feeding areas in cool ocean waters — regions such as Ireland and New England, for example. But a recent 3,100-mile-long odyssey from Ireland to Africa by a shark nicknamed Banda illustrates how little science knows about the biology of the second-biggest fish on Earth, researchers said. The amazing journey was first reported by the Belfast Telegraph.

"The recording of this magnificent journey by a basking shark from Malin Head [in Ireland] to warmer tropical waters questions many of the fundamental theories marine biologists have regarding the species and its life-cycle," researchers said in a statement.

Banda, a 16-foot-long (5 meters) female basking shark, was tagged off the coast of Ireland in July by the Irish Basking Shark Study Group. Basking sharks were named by fishermen who saw them seemingly lolling at the surface and "basking" in the sun (the sharks are also called sun or sail fish). Banda earned her sun fish moniker, traveling 3,100 miles (5,000 kilometers) south of the spot where she was tagged  in search of warm, tropical waters off Africa, near Senegal, before dropping her tracking tag.

Banda's tropical vacation is the first hint that northeast Atlantic sharks may migrate south like their west Atlantic cousins.

Skomal, with the Massachusetts Division of Marine Fisheries, tagged 25 basking sharks off Cape Cod, Mass. The sharks spent winter in the Sargasso Sea and the Caribbean, as well as off the coast of Brazil. One shark spent a month near the mouth of the Amazon River. At the time, no one had ever tracked sharks from European waters to the tropics.

Pacific basking sharks may also undertake long journeys. On Feb. 2, 2012, a basking shark tagged with a tracking device in June 2011 suddenly surfaced near Hawaii. The fish, tagged near San Diego, is one of only four basking sharks ever tracked in the eastern Pacific.

Through tracking and local surveys, the Irish group hopes to learn more about the shark's lifestyle and push for its protection within Irish waters. The basking shark is listed as endangered by the International Union for the Conservation of Nature. For decades, it was fished for its liver oil and fins or killed for accidently destroying fishermen's nets.

Once numbering in the hundreds of thousands in temperate ocean waters, the world's second-largest fish is now a rare sight. They can reach 45 feet (13 m) long, with a tremendous, gaping jaw for filter-feeding, and tiny little teeth. Despite being under protection from fishing in most areas, basking shark numbers worldwide are dwindling for unknown reasons.

With the help of local school children (through its Monster Munch project), the Irish study group tagged five sharks this season, and are waiting to recover three remaining GPS tags (one tag popped off early).

"Recovering five complete basking shark tracks will allow us to compare the data and make informed conclusions," said wildlife researcher Emmett Johnston, the project's coordinator. "Until then, there is not much we can say other than this is a highly unusual place to find a species that is presumed to inhabit temperate waters."