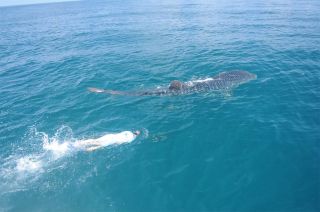 The world’s largest fish is the whale shark, which can grow to 40 feet long and weigh an average of 20 tons. The sharks are carnivorous, but they aren’t likely to take a nibble out of an unwary surfer – they filter plankton through their enormous mouths while swimming at the surface. In fact, whale sharks are so friendly that people often swim with them.

The world’s second largest fish, the basking shark, is also a filter feeder.

The largest confirmed individual shark was 41.5 feet long and weighed 47,000 pounds – though sailors say they have seen sharks that are even larger. Whale sharks are the largest non-whale animals in the world, and their enormous size puts them in a class with dinosaurs. Whale sharks are a vulnerable species, and despite conservation efforts the school-bus-sized creatures continue to be hunted in some Asian countries.

Scientists are still trying to puzzle out the migration and behavior of these gentle giants. They mainly live in warm tropical waters and use their built-in filters to feed, but there is some evidence that they take long migratory journeys to colder deeper waters during different parts of the year. They also have never been observed mating or giving birth in the wild, though scientist have figured out that they give birth to live young (the eggs hatch within the mother’s body). Females store sperm and give birth to live shark pups throughout the year. Whale sharks live to be 70-100 years old.

What about the biggest fish ever caught? 21-foot-long whale sharks have been caught, but we’re going to give that fish tale title to a 1496-pound Atlantic Bluefin tuna caught off the coast of Nova Scotia back on October 26, 1979. Ken Fraser landed the monster fish in an impressive 45 minutes, and has written a book about his experience.

The largest freshwater catch may be a bear-sized catfish caught in the Mekong River in Thailand in 2005. It weighed 646 pounds. The villagers say they tried to keep it alive, but it died so they ate it.