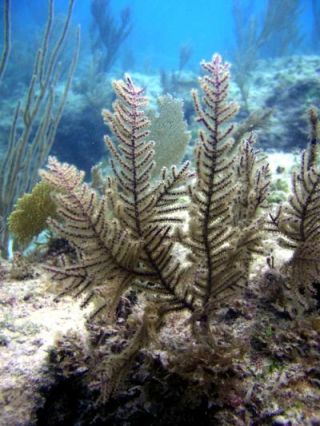 No one thinks damaging coral is sexy, but researchers from the University at Buffalo just made it official. Turns out, coral sex is dampened after injury from storms and human activity.

Their study shows that while coral adapts to injury events by initially growing back rapidly, reproduction rates are suppressed up to four years after initial injury. This is particularly alarming since size, rather than age, dictates coral's health and maturity, explained study leader Howard Lasker.

Many coral have asexual and sexual reproduction, the latter usually a wild sex party of sorts, where corals release sperm and eggs into the water at a precise time. Those sex gametes hook up with each other, from different individuals, to produce free-floating larvae called planulae.

Lasker and his team studied coral colonies in the Bahamas that were being harvested for use in skin care products. They found that even years after harvest spermaries (coral sperm colonies) and polyps, where coral stores eggs, were underproducing.

"On the science side of it, this really raises the question, 'Well, what's going on?'" Lasker told LiveScience. "This is a healthy-looking colony, those wounds [from harvesting] are long, long healed, so what's different about it? And that's something we're still puzzling over."

"Coral are more adaptable than we may have thought in the beginning, but that doesn't mean they'll persist despite changes," Page told LiveScience.

When energy is given to one resource — in this case, quick regrowth after injury — it's taken from another, Page explains. This leaves more persistent effects than were previously suspected — in this case, long-term, slowed reproduction.

The findings have implications for future coral health. While researchers had previously thought coral rebounded heartily after injury events, such as those incurred from hurricanes and other storms as well as human activity such as boating, this study reveals that populations cannot rebuild as quickly as hoped. But the most effective way to protect coral continues to be the cessation of injury events altogether.

"When there's damage, that damage has a longer-term effect than we may have initially envisioned, but the more significant factor is that initial damage," said Lasker. Coral is a particularly sensitive creature, affected by a host of climate change-related events from increased water temperature to more frequent and severe storms. And now, research reveals that it is difficult to predict how these marine animals will react to injury, since changing variables will determine their health and growth.

To conserve and protect coral, explained Page, we must both avoid their continued injury, and examine our restoration approaches to consider long-term effects of damage as well as the significant adaptability of these organisms. If a multifaceted and focused approach to management is taken, coral, threatened worldwide, may just be able to revamp its sex life.

Many corals are hermaphroditic broadcast spawners, meaning they release packets of sperm and eggs into the water.

Warming waters signal the coral that it's time to start producing sex cells, then a precise combination of daylight and moonlight trigger the sudden, simultaneous release of eggs and sperm.