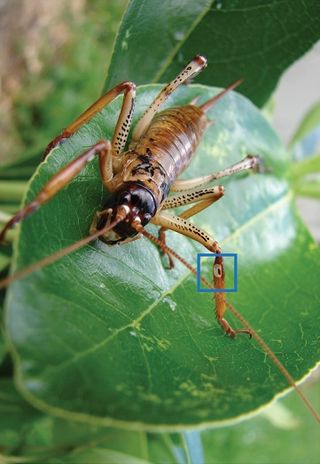 Dolphins and crickets might have more in common than you think.

A large group of insects that includes crickets and katydids is believed to share a hearing feature with toothed whales like dolphins, according to a new study.

For insects in the Ensifera group, sound is known to be detected by eardrums on the front legs. Researchers looking at the Auckland tree weta, a species in this group, then discovered that noise passes through a sound-transmitting lipid (a compound that includes oils and fats) to get to the insect's hearing organs.

"The discovery is interesting as previously only toothed whales were known to use this hearing system component, the lipid. There are many similarities in the use of lipids to amplify the sounds and help both animal groups to hear," researcher James Windmill, of the University of Strathclyde, said in a statement.

"We don't know why animals who are so far apart in evolutionary terms have this similarity, but it opens up the possibility that others may use the same system component," Windmill added.

In their new research, Windmill and colleagues looked at the tree weta's ears with a new tissue analysis and three-dimensional imaging techniques. In doing so, they discovered a tiny organ in the insect's ears (they named it the olivarius), where the lipid seems to be made. Though the researchers focused on the Auckland tree weta for their study, they believe the entire class, including crickets and katydids, shares this feature.

A study detailed in the Nov. 16 issue of the journal Science found the ears of the South American katydid Copiphora gorgonensis, which are located on their legs, look a lot like human ears. For people, the eardrum vibrates when sound waves hit it. Then tiny bones called ossicles transmit and amplify these vibrations so they can be transmitted to the cochlea, a fluid-filled coil that houses thousands of hairlike cells that send the vibrations to the brain for processing. Similarly, katydids have dual eardrums that transmit vibrations to a plate that works like a lever, increasing the force so the vibrations can be sent to a fluid-filled vesicle that acts like a simplified cochlea, the researchers found.

The new study was detailed online last week in the journal PLoS ONE.