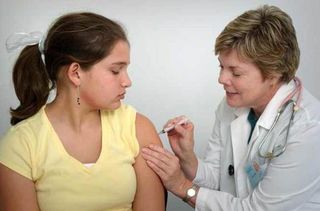 Flu viruses replicate quicky, so the helpful antibodies you may have developed to a previous year's strain often can't attach to this year's viruses. In other words, viruses evolve and so must the vaccines.
(Image: © CDC)

Flu season has officially started, according to the Centers for Disease Control and Prevention (CDC).

Flu activity around the country is high enough that health officials announced today (Dec. 3) the season is under way. It's the earliest start to the season since the 2003-2004 flu season, excluding the 2009 pandemic, said Dr. Thomas Frieden, director of the CDC.

States in the southeast — including Alabama, Mississippi, Texas and Louisiana — are seeing particularly high rates of flu cases.

While the course of a flu season is always unpredictable, this year's early start and the specific strains circulating suggest "this could be a bad flu year," Frieden said.

Last year, flu season did not begin until late February, which was the latest start in 24 years.

The level of flu activity that health officials are seeing now is usually not seen until January.

If you haven't been vaccinated yet, it's time to get your shot, Frieden said.

"Vaccination is by far the best tool we have to protect ourselves against flu," he said. About 37 percent of the U.S. population ages 6 months and older have been vaccinated so far, the CDC said.

Pass it on: Flu season has officially begun.