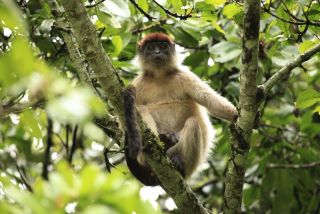 It's an apparent case of hormones going haywire: When male monkeys eat plants with compounds that mimic the feminizing hormone estrogen, they become less likely to groom each other and more likely to mate or act aggressive, a new study finds.

The research is the first to observe the connection between plant-based estrogenic compounds, or phytoestrogens, and behavior in wild primates — in this case, a group of red colobus monkeys in Uganda. Michael Wasserman, a researcher at McGill University, lead the study over 11 months in Uganda’s Kibale National Park.

“This is the first study to link up estrogenic plants, behavior and hormone levels in a wild primate,” Wasserman told LiveScience. In mammals, estrogens are the female sex hormones, responsible for regulating ovulation and the menstrual cycle, among other things. Estrogenic plants such as soy may play a role in human health, making the question of how these plants influence primates an important one.

Monkeying around with hormones

With the help of local Ugandan field assistants, the researchers followed a group of red colobus monkeys everyday from morning until afternoon, collecting behavioral observations and fecal samples from 10 adult males. They then analyzed the 407 fecal samples for levels of estradiol and cortisol – two hormones involved in stress and reproduction. [10 Odd Facts About the Female Reproductive System]

Wasserman found seasonal variation in the consumption of estrogenic plants (including a species in the plant family that includes soy), ranging from 0.7 percent to as much as 32.4 percent of the red colobus diet in any given week. Higher consumption of estrogenic plants corresponded to higher levels of estradiol and cortisol in the monkey feces, as well as more acts of aggression and mating, and fewer acts of grooming. Wasserman says that the altered behavior wasn't something he noticed while in the field – it took statistical analysis to recognize the behavioral change.

Wasserman said that less grooming and more aggression has been documented in a previous study of captive primates and phytoestrogen consumption, but the finding that the animals were mating more was a surprise.

“We were thinking that the estrogenic activity could disrupt mating behaviors, but instead they mated more,” he said. He offered a few possible reasons for the increased sex: One possibility is that the nutritional content of the plants boosts sex, as monkeys tend to make more monkeys when there are extra calories available.

Or it could be that males are confused by chemical cues from the plants, and mistakenly believe that the females are in estrus. Alternately, the plant hormones are directly causing the behavior, but one correlational field study can't make that link definitively.

Wasserman is still crunching the numbers to understand what effect the phytoestrogens had on the hormones and behavior of the female colobus monkeys. He reported his results on male monkeys in the November issue of the journal Hormones and Behavior.

Phytoestrogens are found in lots of plants around the globe – from soy to figs to eucalyptus – but their effects on animals aren’t well known in the wild. [Top 10 Poisonous Plants]

Heather Patisaul, a biologist at North Carolina State University who was not involved in the study, said that much more is known about how phytoestrogens impact rats. “We have shown that phytoestrogens can influence the brain and behavior, particularly pathways that are estrogen sensitive,” she said, adding that the new study suggests that the same is true for colobus monkeys. “It demonstrates that such responses can occur in numerous species and may be adaptive.”

The environment can provide key signals that influence reproduction and behavior, Patisaul said. “Understanding these signals and how they impact our physiology is important when thinking about how other environmental cues may influence us, such as endocrine disruptors, stress or nutrition.”

Endocrine disruptors are any chemical that interferes with the endocrine system, the system that produces the hormones that regulate the body.

For primates of the human variety, there has been much medical research into the effects of soy, a plant food containing phytoestrogens, on health. Some have touted its benefits in combating cancer, alleviating the symptoms of menopause, and other effects. Wasserman says that unraveling the mysteries of the primates might be a good step to understanding how soy affects humans.

His previous research showed that mountain gorillas eat plants with estrogenic compounds. “Because that’s going on in an ape in a forest in east Africa, it’s likely that we have been interacting with these types of plants for a long time," Wasserman said. "If it’s part of our evolutionary history, you would expect our biology could deal with it or we may even benefit from them. However, mountain gorillas eat a lot of leaves while human ancestors likely focused more on ripe fruits.”

Wasserman now plans to study presence of compounds in the close human cousin, the chimp, and other fruit-eating primates. “If these compounds are something we’ve been eating for a long time, they might not have a negative effect," he said. "But if we only started eating them with the rise of agriculture, then concerns over the potential for phytoestrogens to act as endocrine disruptors seem more plausible.”