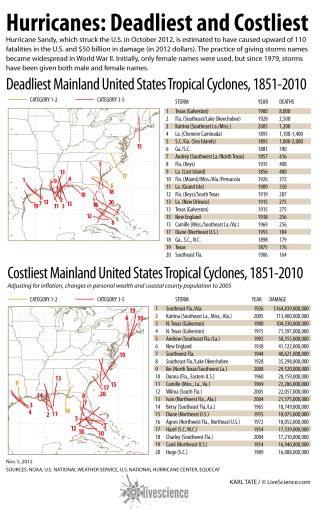 The deadliest hurricane in the period since 1851 hit Texas in 1900 and claimed 8,000 lives.
(Image: © Karl Tate, Livescience.com contributor)

The deadliest hurricane to strike the United States since 1851 was the Galveston, Texas hurricane of Sept. 1900. The category 4 storm claimed 8,000 lives by most reports, although the true toll may have been as high as 12,000.

The costliest hurricane was the 1926 category 4 storm that hit southeast Florida in 1926. The unnamed storm caused $165 billion in damage (in 2005 dollars).

By comparison, 2005’s hurricane Katrina had the third-highest death toll, killing 1,200. Katrina was the second costliest hurricane, with $113 billion in damage (2005 dollars).

Another extremely costly hurricane was 1992’s Andrew, which did $59 billion worth of damage in southeast Florida and Louisiana.

The practice of giving storms names became widespread in World War II. Initially, only female names were used, but since 1979, storms have been given both male and female names.

Damage amounts and death tolls are from an August, 2011 study by NOAA entitled “The Deadliest, Costliest, and Most Intense United States Tropical Cyclones from 1851 to 2010 (and Other Frequently Requested Hurricane Facts.”