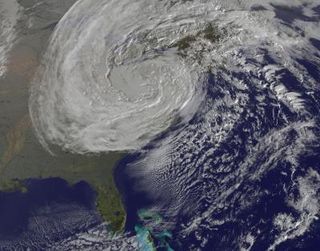 This GOES-13 satellite image was captured on Oct. 31 at 1240 UTC as Sandy's circulation was winding down over Pennsylvania. Sandy had been downgraded a remnant low pressure area.
(Image: © NASA GOES Project.)

In sheer power, Hurricane Sandy ranks second among modern hurricanes, beating even Hurricane Katrina, according to Brian McNoldy, a hurricane researcher at the University of Miami.

Out in the Atlantic Ocean, Sandy was the most energetic tropical cyclone in history, thanks to its massive wind field.

Once Sandy ramped up to a Category 1 hurricane and slammed into New Jersey, the storm's integrated kinetic energy was second only to Hurricane Isabel in 2003, McNoldy wrote in a blog post.

"It stood out to me that this was a pretty unique case of a rather weak storm as wind speeds go, but huge on the impact scale," McNoldy told OurAmazingPlanet.

Integrated kinetic energy (IKE) is a new scale designed to better convey the destructive power from both a hurricane's wind and storm surge. It's a measure of the wind speed integrated over how wide an area the winds are blowing. The U.S. government patented IKE in 2007. The Saffir-Simpson Scale, used by the National Weather Service, only reports top wind speeds.

The IKE scale helps explain why Hurricane Sandy, which quickly weakened after landfall, created such widespread flooding and damage, McNoldy wrote. The storm surge, combined with a full moon and high tide, affected hundreds of miles of highly populated coastline. The metric also incorporates the storm's enormous size: The wind field was so large that tropical storm force winds (45 mph/ 72 kph) extended 485 miles (780 kilometers) out from the center at landfall. (Out at sea, the wind field reached a maximum extent of 520 miles, or 835 km.)

In modern records, Sandy’s IKE ranks second among all hurricanes at landfall, higher than devastating storms like Hurricane Katrina, Andrew and Hugo, and second only to Hurricane Isabel in 2003, McNoldy calculated.

Sandy’s IKE was more than 140 Terajoules, meaning it generated more than twice the energy of the Hiroshima atomic bomb, McNoldy wrote. At any given moment, many hurricanes contain more energy than an atomic bomb in their surface winds alone, he wrote.