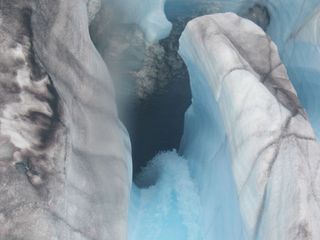 Melt streams on the surface of the Greenland Ice Sheet.
(Image: © © Science)

In July of 2006, the frigid water of a large meltwater lake atop the Greenland Ice Sheet drained in less than two hours, cascading down through the ice sheet faster than the rushing waters of Niagara Falls. Scientists were awed by the event. And today they explained what happened. The water gushed all the way down to the bed of the ice sheet, through almost 0.6 miles (1 kilometer) of ice. The flood doubled the average speed of the ice sheet's slide across the bedrock underneath it. Scientists have long suspected that surface meltwater could drain to the base of an ice sheet and lubricate the ice sheet's flow out to sea. But no one had ever observed the phenomenon — until now. The new observations, detailed in an early online April 17 issue of the journal Science, show that while the seepage can significantly accelerate the summer movements of large stretches of the ice sheet, it has little effect on the movements of outlet glaciers, the tongues of the ice sheet that go out to the ocean where their fronts break off as icebergs. Understanding the mechanics of ice flow has become particularly important because of the concerns that global warming, which can enhance surface melt, could cause sea levels to rise dramatically. Rapid drain Researchers placed monitoring instruments in and around the 2.2 square-mile (5.6 square-kilometer) glacial lake in the summer of 2006. Ten days after they left the area, a large crack developed over almost the whole span of the lake and all 11.6 billion gallons of water started to drain like a big bathtub. "We found clear evidence that supraglacial lakes — the pools of meltwater that form on the surface in summer — can actually drive a crack through the ice sheet in a process called hydrofracture," said study team member Sarah Das of the Woods Hole Oceanographic Institution. "If there is a crack or defect in the surface that is large enough, and a sufficient reservoir of water to keep that crack filled, it can create a conduit all the way down to the bed of the ice sheet." These new findings showed scientists that the conduits that drain surface meltwater, called moulins, can funnel it all the way to the base of the ice and confirmed some long-held suspicions that this meltwater could enhance the seaward movement of the ice. Slippery slope Glaciers are like frozen, slow-moving rivers. They build up over time through snowfall, but gravity also tugs them inexorably toward the sea. Glacier speeds vary from, well, glacial, to upwards of 65 feet (20 meters) a day. Jakobshavn Isbrae has been clocked at this terrific speed. "To influence flow, you have to change the conditions underneath the ice sheet, because what's going on beneath the ice dictates how quickly the ice is flowing," Das explained. "If the ice sheet is frozen to the bedrock or has very little water available, then it will flow much more slowly than if it has a lubricating and pressurized layer of water underneath to reduce friction." By the same token, you're more likely to slip on a wet floor than a dry one. Das and her colleagues found that the lubricating effect of the meltwater can double the speed in some of the broad, slow-moving areas of the ice sheet. But the lubricating effect on the faster-moving outlet glaciers is less than scientists had previously thought, accounting for only a few percent of the movement of these glaciers. More important to speeding up the flow of outlet glaciers is the calving of icebergs into the sea, which may also be affected by warming temperatures, said team member Ian Joughin of the University of Washington. Das and Joughin's work shows that "we can expect the ice sheet in a warming world to shrink somewhat faster than previously expected, but [that] this mechanism will not cause greatly faster shrinkage," said Richard Alley of Penn State, who was not involved in the study. The study was funded by National Science Foundation, NASA, and the WHOI.