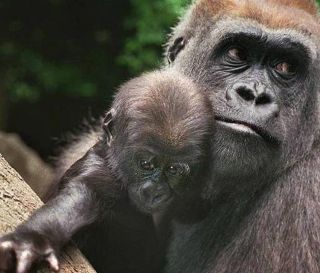 A western lowland gorilla cradles her baby in a zoo.
(Image: © AP)

NEW YORK — If the usual threats of poaching and habitat loss weren't enough, gorillas face the added danger of a deadly disease that has been surging through their ranks. The highly-infectious Ebola virus has decimated huge swaths of the already diminished western lowland gorilla population. Scientists are in a race against time to protect these animals from the disease.

Over the past 20 to 25 years, hunting and disease alone have reduced the numbers of western lowland gorilla by 60 percent, according to the World Conservation Union (IUCN).

"Throughout their range the great apes in central Africa are being hammered by those triple threats: loss of habitat, hunting for the bush meat trade, and disease," said Kenneth Cameron, a field veterinarian with the Wildlife Conservation Society in the Republic of the Congo, at the Gateways to Conservation 2008: The State of the Wild conference here this week. "At their current rate of population decline, we stand to lose 80 percent of the population of [the western lowland gorilla] over the next ten years."

Because of the decimation Ebola has caused, the IUCN elevated the status of the western gorilla from endangered to critically endangered in September 2007.

Scientists say their only chance to save the species is to combat Ebola, which kills about 95 percent of the gorillas it infects. The virus causes massive internal bleeding in its victims, and has no known cure.

There is hope, however, of a vaccination.

"These animals obviously need help," Cameron said. "And we're hoping that being able to vaccinate them against one of their major threats will be something that is possible, but it is too early to tell. We don’t know for sure that it's going to work, but we do feel we need to try."

Scientists hope to use a vaccine that's been developed for humans on the animals, which share many of our genes.

Even if researchers find the vaccine effective in preliminary trials, it will be tough to vaccinate enough gorillas to make a difference. The gorillas are spread out throughout the Republic of Congo, Gaban, Cameroon and the Central African Republic, and they are notoriously difficult to find. For those reasons, shooting large numbers of them with dart injections of the vaccine could be a challenge. But if scientists try to hide oral vaccines in some of gorillas' favorite fruits, individuals could hoard them or other animals may get to them first.

"I think we're going to be able to protect particular populations, but not every gorilla," said William Karesh, vice president and director of wildlife health services at the Wildlife Conservation Society. "The urgent thing is to make sure we get some animals protected. That might buy us time to figure out some other strategies and mechanisms to protect them from going extinct."

The roughly 400 western lowland gorillas in captivity around the world are doing fine, Karesh said, so the species will likely survive in zoos at least.

"We're just concerned about them going extinct in the wild," he said. "They play an important role in the ecology of the forest. They distribute the seeds of the trees — they're basically gardening the forest. That will all change if they're gone."