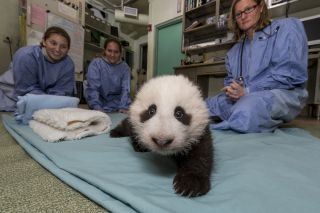 During a checkup Thursday (Oct. 18), zookeepers took the cub off the exam table and let him test out his wobbly crawling skills on a mat on the floor.

"I would say he's making progress," P.K. Robbins, San Diego Zoo senior veterinarian, said in a video from the zoo. "He's kind of at that awkward toddler stage where some limbs are working better than others. Certainly the front legs want to get up and go. The back legs sort of got a little bit left behind. But he's definitely learning." [See Panda Cub Video]

Robbins added the cub is getting a little spot on his tail, and the baby teeth at the front of his mouth are starting to come in.

The cub measured 21.6 inches (55 centimeters) long and weighed in at 7.2 pounds (3.3 kilograms) Thursday, zookeeper Jennifer Becerra wrote in a blog post, adding that his development is right on track for a panda of his age.

The cub was born to panda mom Bai Yun on July 29 and will not be named until he is 100 days old, following a Chinese panda-naming tradition. During an exam on Sept. 6, zoo veterinarians determined the cub's sex.

Researchers estimate only 1,600 giant pandas are left in the wild, and scientists say captive breeding is an important way for them to study and conserve the endangered species.

Bai Yun has given birth to five other cubs at the San Diego Zoo. Four of those offspring were moved to China to join the country's giant panda conservation and breeding program. The previous cub born to Bai Yun was a male named Yun Zi. He remains in San Diego and celebrated his third birthday in August.