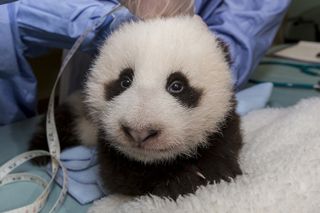 The San Diego Zoo's newest giant panda cub got another checkup Tuesday (Oct. 9) and vets say he's about to sprout some baby teeth.

The 10-week-old cub weighed in at 7.3 pounds (3.3 kilograms) and measured about 20 inches (53 centimeters) from the tip of his nose to the tip of his tail. His development is right on track with other cubs born at the zoo and his chompers are coming in, vets said.

"I can feel that those teeth are under the gums and getting closer to emerging out," Beth Bicknese, a senior veterinarian at the zoo, said in a video.

Pandas have larger and flatter molars than other bear species, which is believed to be an adaption for their diet of tough bamboo. The panda cub won't start eating bamboo until he's about a year old, according to the zoo. For now, the cub will keep nursing from his mom, Bai Yun. She has given birth to five other cubs at the zoo.

The newest cub was born on July 29 but will not be named until he is 100 days old, following a Chinese panda-naming tradition. During an exam on Sept. 6, zoo veterinarians determined the cub's sex.

Researchers estimate that there are only 1,600 giant pandas are left in the wild, and scientists say captive breeding is an important way for them to study and conserve the endangered species.