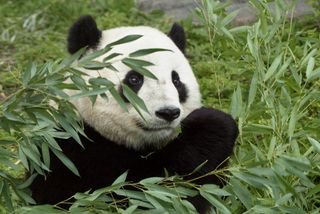 Tai Shan was born at 3:41 a.m. July 9, 2005, weighing only a few ounces at birth. The first cub for mother Mei Xiang (may-SHONG) and father Tian Tian (tee-YEN tee-YEN), he was conceived through artificial insemination March 11, 2005, in a procedure performed by National Zoo scientists and veterinarians.
(Image: © Jessie Cohen/Smithsonian's National Zoo)

For all their cuteness, giant pandas are in a tight spot. There are fewer than 1,600 pandas left in the wild, and a new study found that more than half of the bears' already diminished natural habitat will be unlivable in 70 years thanks to climate change.

To protect the adorable black-and-white creatures, zoologists are working furiously to understand and improve panda-breeding in captivity. Toward that end, another recent study investigated male pandas' reproductive cycle, and found that, contrary to females, males are ready and able to mate during more than six months of the year.

This is welcome news, given that female pandas have a sharply limited fertility window of only 24 to 72 hours a year.

"The more we know, the more we can understand them and the better we're able to put guidelines in place for their protection," said Copper Aitken-Palmer, head veterinarian at the Smithsonian Conservation Biology Institute in Front Royal, Va., and leader of the reproduction study. "We can potentially manage them better in captivity, and we're actually looking toward reintroduction programs to put captive pandas back into the wild." [Butter Balls: Photos of Playful Pandas]

When the time is right

Aitken-Palmer and her colleagues studied eight male pandas over the course of three years at the Chengdu Base of Giant Panda Breeding in China. They analyzed pandas' sperm density, hormone levels and testes size, as well as reproductive behaviors such as movement, scent-marking and vocalizations, to map out their reproductive viability over time.

The research showed that male pandas have a breeding season, but it is much longer than that of females.

"The coordinated increases in testes size, androgen production, sperm density, and sexual behaviors occur over a protracted interval, likely to prepare for, and then accommodate a brief, unpredictable female estrus," the scientists wrote in a paper reporting the results published today (April 4) in the journal Biology of Reproduction's Papers in Press.

Still, mating for pandas is notoriously difficult, especially in captivity.

For example, zoologists at Scotland's Edinburgh Zoo gave their female panda, Tian Tian, and their male, Yang Guang, some private time in an indoor enclosure with the cameras turned off on April 3 and 4, when Tian Tian's fertility window opened. Though the pair met repeatedly, zookeepers are losing hope of seeing a panda cub this year.

"Each time the pair met, we saw a huge amount of eagerness and attraction between Tian Tian and Yang Guang," Iain Valentine, director of research and conservation at the zoo, said in a statement. "There was lots of vocalization and encouragement from our female and physical contact between the two. He mounted her several times, however full mating did not occur. Although both have bred before and have borne cubs with other pandas, they are both still relatively inexperienced." [Video: Panda Mating Dance – Lessons Needed?]

Yet scientists say we shouldn't blame pandas for their reproductive difficulties.

"All of this physiology and these adaptations worked great for the panda in the wild, historically," Aitken-Palmer told LiveScience. "In captivity, we changed all the rules and made it more challenging for them."

For example, while pandas are solitary in the wild, they are often put in enclosures with other pandas in captivity, which could complicate their natural behavior, she said.

Turning up the heat

Though pandas are the pride of many zoos around the world, their situation in the wild is growing dire. One of the greatest threats to the furry creatures is habitat loss from climate change and human encroachment, scientists say.

While the species used to roam over most of southeastern China, northern Myanmar, and northern Vietnam, now pandas are limited to six mountain ranges between the Sichuan plain and Tibetan plateau.

And that habitat is looking to grow much smaller, with pandas set to lose 60 percent of their current range due to climate change by 2080, researchersreported in a paper published in the International Journal of Ecology in March. That's a loss of more than 6,200 square miles (16,000 square kilometers).

As global temperatures become warmer, on average, the panda-suitable habitats will move to higher elevations and latitudes, according to climate models. In addition to pandas' limited geographic range, the species has other traits that suggest climate change could hit it hard.

"Giant pandas have a narrow range, do not disperse over large distances, produce one cub every two to three years, and depend on bamboo for 99 percent of their diet," the researchers, led by Melissa Songer of the Smithsonian Conservation Biology Institute, wrote in their paper. "These traits suggest they will be highly susceptible to climate change."

While much of pandas' existing habitat may be lost, the bears might be able to move to new regions.

"New areas may become suitable outside the current geographic range but much of these areas [are] far from the current giant panda range and only 15 percent fall within the current protected area system," the scientists wrote. "Long-term survival of giant pandas will require the creation of new protected areas that are likely to support suitable habitat even if the climate changes."

And ultimately, there is reason for hope.

"The panda is so well-known, such a flagship species for conservation in general," Aitken-Palmer said. "I think if we can't have hope for the panda, who can we have hope for? I want to have hope, but conservation worldwide is in trouble. Only time will tell."