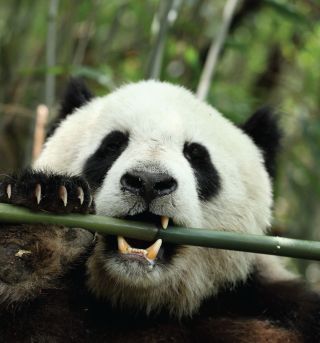 Pandas love their bamboo, but have trouble digesting it.
(Image: © Fuwen Wei, taken by Xiaoguang Zheng)

How giant pandas survive on a diet of hard-to-digest bamboo has long mystified researchers. It turns out, the roly-poly bears carry around their own digestive helpers in their bellies, a new study suggests.

Though the pandas, which can grow to 350 pounds (160 kilograms), are closely related to meat eaters, the vast majority of their diet is plants, in the form of bamboo.

Bamboo is a large, stalk-like grass. Its cells, like those of many plants, are held together by a molecule called cellulose. Most mammals don't have the ability to break down this cellulose, which is why humans can't chomp on tree limbs.

"If fully degraded, cellulose can contribute nearly half of the calories in bamboo," study researcher Fuwen Wei, of the Chinese Academy of Sciences, told LiveScience in an email. "However, because cellulose is very difficult to be digested, the real percent of the calories of cellulose in bamboo available for giant pandas is very low." [Image Gallery: Beastly Bears]

So, why do pandas eat this bamboo, when they shouldn't be able to make much caloric use of it? The study showed that cellulose-degrading bacteria live in the gut of the panda, Wei said. "It is highly possible that it is this kind of bacterium [that] plays an essential role in the degradation of cellulose of the giant panda."

Some plant-eating animals, like cows and sheep, have evolved to have multiple stomachs and very specialized bacteria that help break down a plant’s cellulose. In comparison, humans and other mammals have a simple digestive system that can't release calories from cellulose.

To see how the pandas might get the calories out of cellulose, the researchers analyzed the bacteria they found in samples of wild and captive panda poop. They studied the genetic sequences of the bacterial ribososmes, the protein-making machinery in all cells, to determine what kinds of bacteria the poop contained. They found 85 species, 14 of which hadn't been described before.

They chose a few of the bacteria that had similar genetics to those found in other herbivores to study further, looking for genes in these bacteria that might work to break down cellulose. They found the majority of these genes in a type of bacteria called Clostridium. Species of Clostridium bacteria seem to break down cellulose and use some of the resulting energy, leaving the extras for the panda, Wei said.

These bacteria combine with other unique panda traits, including a strong jaw and fake thumbs, to enable them to forage for, eat and digest bamboo and the cellulose within it.

Tatsudo Senshu, of Kitasato University in Japan who wasn’t involved in the current study, notes that just because they found the bacteria and cellulose-digesting enzymes in the panda gut, that doesn't prove that they do actually break down cellulose into something usable by the panda.

"The presence of any microbes, or genes or enzymes does not necessarily mean that they are actually working (growing, metabolizing or contributing to the digestion) at the place where they are found," Senshu told LiveScience in an email.

The study was published Monday (Oct. 17) in the journal Proceedings of the National Academy of Sciences.