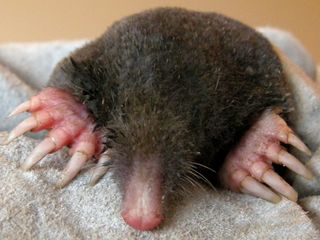 Most animals with paws have a similar hand shape, with five fingers, or claws, on each. One big exception to this rule is the mole, which has an extra thumb on its front paws. New research shows that this extra thumb isn't a thumb at all, but an extended wristbone.

Having extra fingers or toes, a condition called polydactyly, isn't all that uncommon in humans and other animals. The condition happens in some form about once every 500 human births, even higher in males and African-Americans.  It can occur on both hands or feet, or just one hand or foot.

Cats and dogs, especially some specific breeds, often have additional toes on their back paws, which traditionally have four digits. Giant and red pandas also have an extra thumb, which helps them grasp bamboo.

By studying the growth of Iberian mole (Talpa occidentalis) paws in the womb, and comparing it with the development of the paws of shrew — a closely related species that has five-fingered paws — the researchers were able to tease apart how these special moles grow their extra thumbs. Led by Marcelo Sanchez at the University of Zurich in Switzerland, the team specifically looked at gene expression during the paw's development.

They found that the mole's extra thumb sprouts from a bone in its wrist, with the thumb-bone growing parallel to the "normal" inner thumb; but that's where the similarities stop. The outer thumb doesn't have any moving joints, consisting of a single, sickle-shaped bone that develops later than the inner thumb and the rest of the mole's fingers.

The bone develops out of a wristbone called the seasmoid bone, the same way the pandas' extra thumb develops. The researchers hypothesize that too-high levels of testosterone in the moles could play a role in this extraordinary development, as the hormone is important for bone and finger growth.

Like the panda's, the mole's extra thumb gives the animal a special advantage. The researchers believe that the extra palm area (the bone makes the palm wider) allows more efficient digging, and the solid piece of bone on the outside edge makes the palm more rigid, since it can wiggle, but not bend. Improved digging abilities are important to the mole, which digs underground lairs.

This makes sense, because other species of mole that don't tunnel as much have smaller, stubbier outer thumbs, the researchers said. Either these moles never developed the need to tunnel underground to the same extent, so never fully developed the outer thumb, or environmental changes no longer required them to develop it, so they stopped investing extra energy into growing them, the researchers say.

The study was published in the July 12 issue of the Journal of the Royal Society Biology Letters.