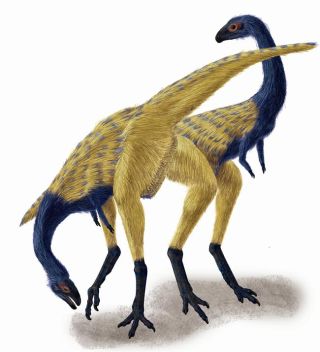 This newly identified dinosaur, Limusaurus inextricabilis, may have used its three-fingered hands to help it stand upright from a lying position. (Note that there is no direct evidence of feather-like structures.) Its hand showed a vestigial first finger and robust second and third fingers.
(Image: © Portia Sloan)

Bird wings clearly share ancestry with dinosaur "hands" or forelimbs. A school kid can see it in the bones. But paleontologists have long struggled to explain the so-called digit dilemma.

Here's the problem: The most primitive dinosaurs in the famous theropod group (that later included Tyrannosaurus rex) had five "fingers." Later theropods had three, just like the birds that evolved from them. But which digits? The theropod and bird digits failed to match up if you number the digits from 1 to 5 starting with the thumb. Theropods looked like they had digits 1, 2 and 3, while birds have digits 2, 3 and 4.

That mismatch failed to support the widely accepted evolutionary link between dinosaurs and birds.

Now, newly described fossilized hands from a beaked, plant-eating dinosaur, called Limusaurus inextricabilis, reveal a transitional step in the evolution of modern wings from dino digits. The finding could resolve a debate over which fingers ultimately became embedded in the wing.

"Limusaurus is another one of those discoveries that makes one excited to be a paleontologist," said Matthew Lamanna of the Carnegie Museum of Natural History in Pittsburgh, who was not involved in the new study. "The discovery of a toothless, plant-eating Jurassic ceratosaur, from Asia of all places, is something that nobody in our field ever expected."

The remains of the dinosaur were discovered in the Junggar Basin of Xinjiang, in northwestern China. The deposits date back some 159 million years.

"This new animal is fascinating in and of itself, and when placed into an evolutionary context it offers intriguing evidence about how the hand of birds evolved," said James Clark of George Washington University. He and several colleagues have described the theropod dinosaur in the June 18 issue of the journal Nature.

Jack Conrad, vertebrate paleontologist at the American Museum of Natural History in New York, calls the finding a "spectacular discovery." Conrad was not involved in this current research.

The dinosaur was a ceratosaur, which is the group name for the earliest theropods. The largest known ceratosaur, Ceratosaurus nasicornis, boasted a length of up to 25 feet (8 meters), and showed off a prominent nasal horn. (L. inextricabilis had no crest or horn.)

Stretching no more than 5 feet (1.5 meters) from nose to tail tip, the newly described dinosaur had a toothless beak for nibbling plants.

However, it was the dinosaur's hand that especially caught the attention of Clark and his colleagues. It sheds light on a longstanding question over which fingers are present (albeit in a modified form) in the wings of living birds. And since nearly all paleontologists think that birds derived from a group of theropods some 150 million years ago, remains of such dinosaurs can provide the most full-proof evidence of how that transition from hand to wing occurred.

Here's the digit dilemma in more detail: Again, the most primitive theropods had five digits or fingers. Remains from theropods that are more recent, evolutionarily speaking, show these dinosaurs had three fingers. And until now, scientists have suspected those digits were the inner three (starting with the thumb with respect to our hands). But embryos of living birds suggest the wings are made up of the middle digits, with the inner- and outer-most digits missing. So there's a discrepancy.

The digit arrangement of L. inextricabilis, which Clark says is an evolutionary intermediate between the most primitive five-fingered dinosaurs and the three-fingered ones, matches up with birds' wings. The specimen had the three most central fingers (considered the second, third and fourth digits on a five-digit hand, counting the thumb as the first digit) while an inner, first finger or thumb was reduced to what Clark called "a nub."

With the new discovery, the transition from a five-fingered forelimb to three digits in birds' wings makes sense: Basically, the middle three digits persisted and became modified as part of the wings of modern birds.

"It's not going to stop the debate," Clark said during a telephone interview. But, he added, "no one can argue this isn't an important addition."

For Conrad, the finding just about nails the coffin shut. "I would say it resolves the debate," Conrad said. "It's the best evidence we could hope to have to resolve the debate."

As for how the dinosaur used its "hands," the scientists aren't sure. Meat-eating theropods like T. rex used their hands for grasping prey, but L. inextricabilis was a plant-eater.

"Based on its morphology, we are sure its hands are not for grasping as in most other theropods," lead researcher Xing Xu, of the Institute of Vertebrate Paleontology and Paleoanthropology in China, told LiveScience. "One possibility is that they may have been adapted for assisting the animal when it rose from a prone position to standing, providing important muscular assistance and momentum at the start of the maneuver."