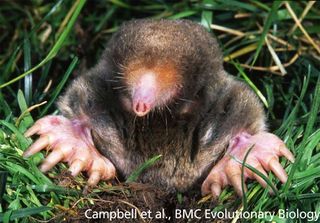 Eastern moles are built for their subterranean lives in tunnels, as they have webbed feet for digging and poorly developed eyes that may be able to detect light.
(Image: © Campbell et al., BMC Evolutionary Biology.)

Eastern moles spend so much of their lives underground that their pinhead-sized eyes are covered by a thin layer of skin. But darkness isn't the only challenge of tunnel life, where the low oxygen levels would leave a mere human bedridden.

Now, researchers describe a surprising adaptation in the blood of eastern moles (Scalopus aquaticus) that enables them to get a workout burrowing, all the while inhaling the same air they have recently exhaled.

"Imagine digging a tunnel underground while breathing into a paper bag," said Kevin Campbell, the study's lead author and a comparative physiologist at the University of Manitoba in Canada.

As a small mammal, the eastern mole has organs similar to those of a human, who would be at the very least uncomfortable after breathing the same air moles inhale. And since red blood cells circulate oxygen in humans, mole blood was the obvious place to look for adaptations, he said.

Past research on animal adaptations to high-altitude, subterranean or other low-oxygen environments has focused on the binding and transport of oxygen by hemoglobin in red blood cells, according to study co-author Jay Storz, an evolutionary geneticist at the University of Nebraska. Hemoglobin carries oxygen from the lungs throughout the body, then returns carrying carbon dioxide, a waste gas, to be exhaled. Research has shown that animals living in limited-oxygen environments have hemoglobin with a higher affinity for oxygen, allowing them to maximize their oxygen intake from the same amount of air, according to Storz.

This is not the case for eastern moles.

"The results of this study indicate that the hemoglobin protein has undergone some adaptive modification that relates to the binding and transportation of carbon dioxide," Storz said. In fact, they found that Eastern moles' hemoglobin has a lower affinity for oxygen.

The sites on their hemoglobin that would otherwise bind to a molecule called 2,3- diphosphoglycerate, or DPG, are gone, making way for more carbon dioxide, the study found. That means the moles can inhale the same air they exhaled and not be in any trouble of carbon dioxide poisoning (since the CO2 would stick to DPG). The same adaptation, he explained, helps the moles' bodies deliver oxygen more efficiently to their tissues.

Campbell said the results of their study were so unexpected, he threw out his first data set. However, this biochemical adaptation could be common, according to Storz.

"We don't know yet how general it is," he said. "It may be quite common in subterranean animals."

Campbell envisions using this discovery to help patients with lung disease who must also cope with air that is low in oxygen or high in carbon dioxide.

[Another idea, put forth by LiveScience's Mad Scientist, is to use the mole blood to tunnel into Fort Knox.]

The study results were published July 16 in the journal BMC Evolutionary Biology.