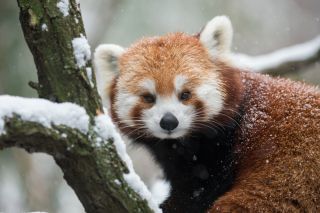 Primarily a bamboo eater, this charismatic mammal is covered in fur the color of cinnamon, which keeps it warm in cooler climates. Found in parts of Asia, red pandas are losing ground due to their specific habitat needs for their food staple, bamboo, that grows in areas becoming more and more disturbed by human activity.
(Image: © Julie Larsen Maher/Copyright WCS)

Red pandas are small mammals with long, fluffy tails and red and white markings. Though they share a name with the more famous giant panda, they are not closely related. In fact, the name 'panda' was first applied to these animals, and not to the larger black-and-white bear.

According to the San Diego Zoo, Frédéric Cuvier, a French zoologist, first described the red panda in 1825, about 48 years before the giant panda was cataloged. He called it the most beautiful animal he had ever seen and named it Ailurus fulgens, meaning fire-colored, or shining, cat. The common name, panda, may be derived from a Nepalese name for these animals, nigalya ponya, which may have meant 'bamboo footed.' The giant panda was given its name later because of similarities to the red panda.

Other names for the red panda include lesser panda, cat-bear, bear-cat, Himalayan raccoon, fox bear and firefox, according to the San Diego Zoo. The mascot of the Firefox Web browser is a red panda, according to Mozilla.

Red pandas were at first classified as relatives of raccoons in the Procyonidae family, because of physical similarities, such as the head, teeth and ringed tail, according to the Smithsonian National Zoo. Later, because of some DNA similarities, they were classified as bears in the Ursidae family. Recent genetic research now places them in their own family, Ailuridae. They have no living relatives, and their nearest fossil ancestors lived 3 million to 4 million years ago.

Red pandas have large round heads and short snouts with large, pointed ears. Their coats are reddish-brown, although their faces are mostly white with reddish 'tear tracks' extending from their eyes to the corner of their mouths. These markings may help keep the sun out of their eyes, according to the National Zoo.

They have long, bushy tails with alternating red and white rings. The tail helps them maintain their balance as they climb trees. Long, sharp claws help them climb to the highest branches to sunbathe or escape from predators, according to the San Diego Zoo.

One feature that red pandas do share with giant pandas is a modified wrist bone that acts like a thumb, helping them grasp bamboo when feeding, according to the National Zoo.

Red pandas live in the mountains of Nepal, central China and northern Myanmar in rainy, high-altitude temperate forests and tropical forests, according to the National Zoo.

One important factor to their habitat is bamboo. The forest must have a bamboo understory for it to be viable for the red panda. Bamboo consists of 85 to 95 percent of their diet, according to the National Zoo. Red pandas eat bamboo shoots and bamboo leaf tips, stripping them off the stems with their mouths. They may also forage for roots, grasses and fallen fruits. Sometimes, they will eat eggs, insects, birds and small mammals as well, but they mostly stick to bamboo.

While it is a big part of their diet, red pandas can digest only about 24 percent of the bamboo they eat. They need to consume 20 to 30 percent of their body weight, or about 2 to 4 lbs. (1 to 2 kg) of bamboo shoots and leaves per day. One study found that female red pandas eat about 20,000 bamboo leaves a single day, according to the San Diego Zoo.

Red pandas are primarily crepuscular — active at dawn or dusk — but they can be active any time of the day, according to the National Zoo. They are solitary creatures; males are territorial and will mark their territory with strong odor from the scent gland at the base of their tail. Like skunks, red pandas can unleash the smell when they are scared to fend off a predator. If that doesn't work, they stand on their back feet and strike out with the claws on their front feet, according to the San Diego Zoo.

These creatures spend most of their time in trees, eating and sleeping without the need to step foot on soil. They also like to lie on branches to sunbathe as they sleep. It can get a bit chilly at night where the red pandas live, so to keep warm, they wrap themselves in their fluffy tails, according to National Geographic. When temperatures drop significantly, red pandas can become dormant. Their metabolic rate gets lower and increases only every few hours to wake them up so they can look for food, according to the National Zoo.

When they wake up, red pandas groom themselves like cats, according to the San Diego Zoo. They lick their front paws and use them to wipe down their fur instead of a full tongue-to-fur bath, though.

Female red pandas give birth during the spring and summer after a gestation period of 114 to 145 days, according to the National Zoo, although it may be as short as 90 days and as long as 158 days. Females build birthing dens in stumps, hollow trees or rock crevices. Dens are lined with grass, leaves, twigs, moss and small branches.

Females can have one to four young, though they usually have twins, according to the San Diego Zoo. The baby red pandas are called cubs. Cubs' eyes and ears are sealed until they are around 2 to 3 weeks of age. They nurse until they are 13 to 22 weeks old. They stay with their mothers in their birthing dens for about 90 days and reach maturity at 18 to 20 months. A typical life span for a red panda is 8 to 10 years in the wild and 15 years in zoos.

Here is the taxonomy of the red panda, according to the Integrated Taxonomic Information System (ITIS):

Some taxonomists, as well as the ITIS and the International Union for Conservation of Nature (IUCN), recognize two subspecies, while others argue for two separate species: the Himalayan red panda (Ailurus fulgens) and the Chinese red panda (Ailurus stanyi).

The red panda is considered endangered and is on the IUCN's Red List of Threatened Species. It is believed that the population has decreased by 50 percent over the past 18 years, and the decline is projected to continue and perhaps intensify in the next three generations. The number of adults in the wild is probably about 10,000 animals, according to the San Diego Zoo, although some estimates put the number at only 2,500.

The population decline is almost solely due to deforestation. Hunting also seems to be increasing, the IUCN says, perhaps partly in response to the increasing number of 'cute' images on social media. There are now worldwide efforts to protect the red panda, according to the San Diego Zoo. In China, there are 35 protected areas; in India, there are 20. There are eight in Nepal and five in Bhutan.