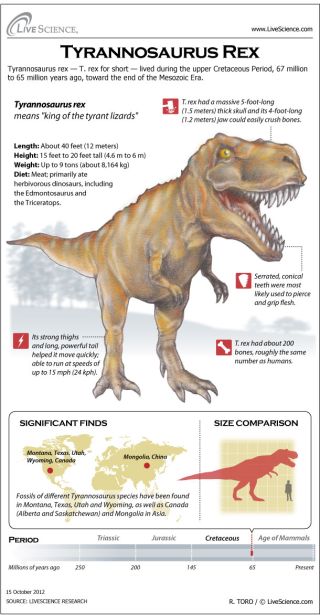 Tyrannosaurus rex — T. rex for short — lived during the upper Cretaceous Period, 67 million to 65 million years ago, toward the end of the Mesozoic Era. The name tyrannosaurus rex means "king of the tyrant lizards.”

Tyrannosaurus had a massive 5-foot-long (1.5 meters) thick skull and its 4-foot-long (1.2 meters) jaw could easily crush bones. Serrated, conical teeth were most likely used to pierce and grip flesh.

Its strong thighs and long, powerful tail helped T. rex move quickly. The animal was able to run at speeds of up to 15 mph (24 kph).

T. rex had about 200 bones, roughly the same number as humans.

Fossils of different Tyrannosaurus species have been found in Montana, Texas, Utah and Wyoming, as well as Canada (Alberta and Saskatchewan) and Mongolia in Asia.

Some scientists consider the Mongolian variety of Tyrannosaur fossils to belong to a separate species, "Tarbosaurus bataar."