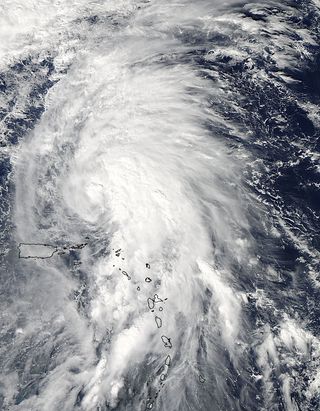 Tropical Storm Rafael formed on Friday evening (Oct. 12), not along after short-lived Tropical Storm Patty started to lose steam. Rafael is expected to become a hurricane shortly, the ninth of the 2012 hurricane season.

While the main peak of the Atlantic hurricane season comes in August and September, a smaller, secondary peak hits in the middle two weeks of October, according to the Capital Weather Gang blog. The second peak comes from a unique mix of still warm ocean waters and atmospheric conditions that can still spawn storms, the Washington Post blog explained.

The 2012 hurricane season had slowed down in recent weeks. Tropical Storm Patty formed a week after Oscar and both lasted only a matter of days before petering out. [Images: Hurricane Season 2012]

Rafael formed quickly on the heels of Patty and looks to be sticking around for longer. The latest update from the National Hurricane Center (NHC) has Rafael becoming a hurricane later today (Oct. 15) and keeping that strength through mid-week. By Thursday it is expected to weaken into a tropical storm as it moves over cooler, northern ocean waters.

Rafael currently has maximum sustained winds of 70 mph (110 kph), just under the hurricane-strength threshold. The storm is located about 600 miles (980 kilometers) south of Bermuda and moving to the north-northwest. The NHC expects the storm to make a turn to the northeast tomorrow and approach Bermuda late in the day, though its center is expected to stay to the east of the island.

Still, a tropical storm warning has been issued for Bermuda, which means that tropical storm conditions are expected in the area within 36 hours. Rafael could bring 2 to 4 inches (5 to 10 centimeters) of rain to the island. The storm could also stir up dangerous surf around the island.

Rafael is the 17th named storm of the 2012 Atlantic hurricane season, which was expected to see 12 to 17 named storms according to an updated August forecast (storms must achieve tropical storm status before they are named). That same forecast predicted five to eight of those storms would become hurricanes, so the number of hurricanes actually seen will have outpaced this expectation if Rafael becomes a hurricane.

Forecasters are not currently watching any other areas in the Atlantic basin for signs of developing into a tropical cyclone (the generic term for tropical storms, hurricanes and typhoons), but the official hurricane season doesn't end until Nov. 30. So it's possible at least one more storm will form between now and then. If one does, it will be named Sandy, the next name on the 2012 Atlantic hurricane list, which is set by the World Meteorological Organization.

In the Pacific Ocean, forecasters are tracking Hurricane Paul, which could brush the west coast of Baja California in Mexico in the coming days.