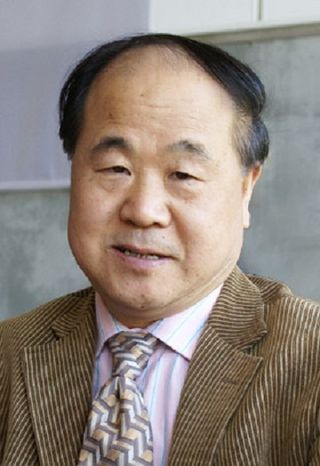 The 57-year-old author has been celebrated for his novels like "The Garlic Ballads" and "Life and Death Are Wearing Me Out," but Mo is perhaps best known to Western audiences for penning "Red Sorghum," which was adapted for a 1987 movie by the same name.

"Through a mixture of fantasy and reality, historical and social perspectives, Mo Yan has created a world reminiscent in its complexity of those in the writings of William Faulkner and Gabriel García Márquez, at the same time finding a departure point in old Chinese literature and in oral tradition," read a statement from the Swedish Academy.

Mo was born to farmer parents in Gaomi in northeastern China's Shandong province. He dropped out of school at age 12 to work farm and factory jobs before joining the People's Liberation Army in 1976. During his military stint, Mo began to study literature and to write, and he published his first short story in 1981.

Much of Mo's work deals with life in the Chinese countryside and the conditions of poor farm workers and peasants. Critics tend to trace these elements to Mo's upbringing.

"There is a very strong moral core in it," Peter Englund, permanent secretary of the Swedish Academy, said of Mo's writing in a video. "It's about ordinary people struggling — struggling to survive, struggling for their dignity."

Three Nobel Prizes in science were awarded earlier this week: