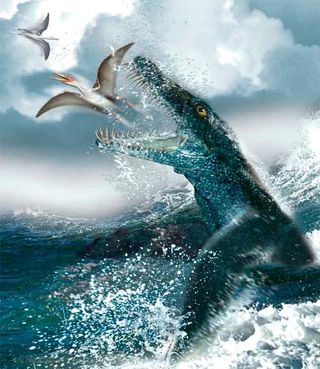 Dubbed the monster, a bus-sized pliosaur could have snacked on other marine reptiles as well as pterosaurs (shown).
(Image: © Tor Sponga, BT)

If Tyrannosaurus rex had ever taken a dip in the ocean, this ruler of the land would have met its match - a bus-sized marine reptile with bone-crushing teeth the size of cucumbers. In the summer of 2006, a team of Norwegian paleontologists and volunteers discovered the 150 million-year-old fossil of a pliosaur on the remote Norwegian archipelago of Svalbard about 800 miles (1,300 kilometers) from the North Pole. A year later, the team, led by vertebrate paleontologist Joern Hurum of the University of Oslo's Natural History Museum, excavated the nearly complete skeleton. Now, after piecing the bones together and analyzing them, the researchers say the fossil represents a new pliosaur species and the largest of its kind discovered to date. "We had a feeling when we excavated the monster in August 2007, but we needed the time until now to glue the pieces together and check all available literature to see if anyone had published something comparably large," Hurum said. "And we reached the conclusion a few weeks ago that this is really the biggest pliosaur found." So far, Hurum's team has discovered a total of 40 fossils at the site, representing many marine reptiles including another similar-sized pliosaur and smaller ichthyosaurs. He notes how rare it is to find such a graveyard of giants preserved for millions of years. "Svalbard was at that time covered by a deep ocean and the bottom was an anoxic mud. The ocean was full of dolphin-like ichthyosaurs, long-necked plesiosaurs and a few pliosaur monsters," Hurum said.

Giants of the sea

Pliosaurs were large reptiles with tear-shaped bodies and short necks, a body plan that let the ancient animals glide easily through the oceans during the Jurassic Period (from 206 million to 144 million years ago). Their relatives, the plesiosaurs, had longer necks and small heads. While most pliosaurs averaged up to 20 feet (6 meters) in length, a few oversized family members are known to have existed from fossil evidence, such as the Australian giant Kronosaurus, which measured up to 36 feet (11 meters) long. The newly described pliosaur, dubbed The Monster by team members, boasted a length of about 50 feet (15 meters) and powerful paddles extending 10 feet (3 meters). "Not only is this specimen significant in that it is one of the largest and relatively complete plesiosaurs ever found, it also demonstrates that these gigantic animals inhabited the northern seas of our planet during the age of dinosaurs" said Patrick Druckenmiller, a plesiosaur specialist at the University of Alaska Museum, and a member of the expedition that found and excavated the fossil.

In addition to its large size, the reptile sported bone-crushing teeth that rival those of T. rex. "In studies of T. rex, the round cross-section of the teeth tells us they are made for bone-crushing," Hurum told LiveScience. "So it could be the same with Pliosaurus, that the round cross-section of these teeth has to do with bone-crushing. It can get larger chunks out of animals if you can crush the bones and swallow the bones too and not only rip the meat off." And Hurum says the top predator's bone-crushing abilities were likely used to snag smaller ichthyosaurs, plesiosaurs and large fish. While there is no evidence of the new pliosaur being attacked or attacking its ocean neighbors, Hurum's team found the tooth of an ichthyosaur stuck in the neck of a plesiosaur discovered in the same area in 2004. "So we know they are chewing on each other," Hurum said.