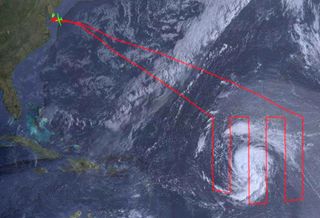 Nadine continues to strengthen over the open Atlantic Ocean with maximum sustained winds of 60 mph (95 kph). It's expected to become a hurricane by tonight or tomorrow, but doesn't currently present any hazard to people on land, according to the National Hurricane Center.

The Global Hawk is part of NASA's Hurricane and Severe Storm Sentinel (HS3) airborne mission, which began its latest field campaign on Sept. 7, just in time for the peak of the Atlantic hurricane season.

The aircraft took off from Wallops Flight Facility on Wallops Island, Va., yesterday and flew in a "lawnmower" pattern over the storm, said the mission's lead scientist Scott Braun. As it flew, it released about 35 dropsondes, instrument packets that fall from the aircraft all the way to the ocean surface and measure temperature, pressure and wind speed. These measurements give scientists a detailed portrait of the cyclone, Braun told OurAmazingPlanet.

The goal of the mission, which will last for two more years and involve multiple flights by two Global Hawks, is to "gather information to better understand how storms intensify," Braun said. The ultimate goal is to improve hurricane forecasts, he said.

While meteorologists have greatly improved predictions of cyclones' paths in the last 20 years, the same cannot be said for predicting changes in a hurricane's intensity. Intensification remains poorly understood due to the complex processes at work when hurricanes ramp up and the difficulty of making measurements inside a violent storm.

There is currently one Global Hawk available for mission scientists, who are planning to send it on another flight over Nadine in two to three days.  A second Global Hawk aircraft should come online in a few weeks, Braun said, to help collect data on hurricane formation and intensification.  [How, When & Where Hurricanes Form]

One current project on which Braun works involves better understanding the influence of hot, dry Saharan air on hurricane formation. There is conflicting evidence on the impact of these air masses: Some studies suggest they help form cyclones; others suggest the opposite. Measurements taken on this most recent flight suggest Saharan air hasn't penetrated the interior of the cyclone, and thus is unlikely to influence its intensification, he said.

Not everything has gone perfectly so far, but that's to be expected, Braun said; a big part of the first few missions will be working out technical difficulties. The Global Hawk was supposed to drop more than 70 dropsondes into the storm, but only got out about half before one became stuck, trapping the other instrument packets inside. Ice also developed on the glass outside the aircraft camera, obscuring the Hawk's photographs, something Braun said he hoped could be prevented in the future.