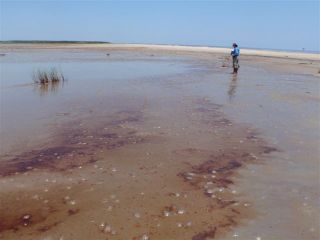 As Tropical Storm Isaac roars over Louisiana and elsewhere on the Gulf Coast, it threatens to disrupt a fragile environment that's still recovering from BP's Deepwater Horizon oil spill in the summer of 2010.

By disturbing the sediments in which the spilled oil is buried, near the beach and deeper in the water, the hurricane could release large quantities of oil, several researchers warn.

"This is another disaster on top of the hurricane that we're going to have to deal with," Garret Graves, chairman of Louisiana's Coastal Protection and Restoration Authority, told the Huffington Post. "The threat is not insignificant."

So far there have been no reports of oil, but that isn't surprising considering most everybody is taking shelter or has evacuated the area, said Lt. Alyssa Johnson, operation officer at the National Response Center, a federal organization responsible for coordinating a response plan to environmental releases of oil or other hazardous materials. [Latest News on Isaac]

Isaac's storm surge, expected to reach heights of 6 to 12 feet (about 2 to 3.5 meters), could transport oil inland, where it could further affect marshlands and wildlife or come into contact with people, Graves told the Bloomberg news service. It also could flood areas containing contaminants such as pesticides, fertilizers and septic system bacteria and wash these back out into coastal waters or into groundwater, University of Florida researcher Andrew Zimmerman told OurAmazingPlanet in an email.

But it's unclear how much oil remains in Gulf sediments and along the shoreline — and how much might be stirred up.

"It could be a lot or a little," said University of Florida researcher Andrew Zimmerman.

An estimated 1 million gallons of MC 252 oil from the Deepwater Horizon spill has been distributed throughout the sediment underwater, on the beach and in marshes, according to Nanciann Regalado, speaking a spokesperson at the U.S. Department of the Interior.

"After danger to humans has passed and field teams can get into the field, samples of oil that has been exposed will be taken," Regalado told OurAmazingPlanet. If chemical analysis finds that the oil was from the Deepwater Horizon, BP may be required to clean up the oil, she added.

Exactly how far below the surface sediment and oil can be disturbed by a hurricane isn't clear, but meteorologist Jeff Masters said large hurricanes can create currents capable of mobilizing whatever oil is at the bottom.

Nick Shay, a professor of meteorology and physical oceanography at the University of Miami, told the Huffington Post this was possible. Hurricanes can "bring whatever is near the bottom up higher in the water column, and currents can then push it towards the coast," he said.

Isaac also could worsen erosion in the area by pounding the shore with waves. According to the National Hurricane Center, Isaac is likely to cause significant erosion of 89 percent of Mississippi's beaches.

The Deepwater Horizon disaster began with a deadly blowout on April 20, 2010, and spilled an estimated 205 million gallons of crude into the Gulf. Among other damage, the oil killed marsh grasses that prevent erosion. For 18 months afterward, marsh erosion rates doubled to 10 feet (3 meters) per year, said University of Florida researcher Brian Silliman.

Most of the grass has grown back, but how it will weather this storm is unclear. Barrier islands and coastlines could be eroded, affecting nesting areas for many kinds of wildlife, including birds and turtles.

The biggest environmental impact of Isaac will be erosion causing the loss of wetlands, Masters said. A 2011 study by the United States Geological Survey found that four hurricanes in the past seven years — Katrina, Rita, Gustav and Ike — together destroyed about 250 square miles (650 square kilometers) of Louisiana. "I expect Isaac will destroy 50-100 square miles of wetlands," or about 130 to 260 square kilometers, Masters told OurAmazingPlanet.

A spokesman for BP said the company isn't worried about Isaac. "Consistent with the past two hurricane seasons, we do not expect any significant impact of residual MC 252 oil following Hurricane Isaac," Ray Melick told the Huffington Post.

Although plants and animals are well-adapted to storms like this, Zimmerman said, they have a lowered ability to cope when they are already stressed from human activities.

Luckily, Regalado said, bird nesting season in the area is largely finished and most wintering birds haven't arrived. However, loggerhead sea turtle nesting season is in full swing, and many nests are at risk of flooding.