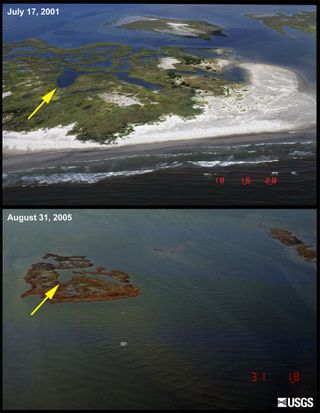 Part of the Chandeleur Islands, before and after Hurricane Katrina. The storm stripped away up to 85 percent of of islands.
(Image: © USGS)

Flying over the remote Chandeleur Islands east of New Orleans off the Louisiana coast shortly after Hurricane Katrina hit, coastal scientist Abby Sallenger of the U.S. Geological Survey was struck by the extent of the devastation to the coastal landscape.

"What happened there was extraordinary," Sallenger said. "After the storm, all of the dunes were completely destroyed. All of the sand was stripped from the islands."

The uninhabited 19-mile-long (31-kilometer) chain was among many of the so-called barrier islands off the Louisiana coastline that were the first parts of the Gulf Coast to feel the wrath of Katrina.

The storm made landfall over southeast Louisiana on Aug. 29, 2005, as a strong Category 3 storm, with winds of 125 mph (201 kph). Storm surges of 10 feet (3 meters) socked hundreds of miles of coastline. Southeast of New Orleans, surges up to 20 feet (6 m) crashed ashore. The city's levees gave way to the onslaught of water, flooding the city built on sand below sea level and leaving it flooded for weeks.

More than 1,800 people died as a result of Hurricane Katrina, 1,600 of them in Louisiana. The storm ripped apart more than 90,000 square miles (233,100 square kilometers) of land, an area nearly the size of the state of Oregon.

Five years later, scars from the storm are still visible on the Gulf Coast's delicate ecosystems, including its barrier islands. Katrina's ferocious winds and waves washed away these islands, killed hundreds of millions of trees and transformed marshlands into giant lakes.

The destruction took place in ecosystems that were already slipping away because of unsustainable development; Katrina simply added fuel to the fire. Today these fragile features are only beginning to heal. But they will never be the same, say scientists. And they will be sustainable only if they can be reconnected to their lifeblood — the Mississippi River.

"We talk about restoration all the time, but people that don't work on it 24/7 think we're going to put it back like it was before," said coastal ecologist Denise Reed of the University of New Orleans. "But it's not about that, it's about making it better going forward."

Louisiana's Chandeleur Islands, which were built up by river sediment, lost about 85 percent of their surface area during Hurricane Katrina. What valuable habitat was left was significantly hurt, Sallenger said.

Five years later, the Chandeleur Islands "are not even close" to recovering that land, leaving them vulnerable to future hurricanes, Sallenger told OurAmazingPlanet.

Aerial photography and elevation maps reveal how little has changed in the region in five years. Before Katrina, the average elevation above sea level on the Chandeleur Islands was 13 feet (4 meters). That dropped to 5 feet (1.5 m) after the storm. The average elevation across the islands has increased only 8 inches (20 centimeters) since.

Pictures taken before the storm show the sand and dunes of the mostly healthy Chandeleur Islands. Pictures after the storm show muddy, sand-starved clumps of earth that appear to be drowning.

"It's very sad," Sallenger said. "It's such a beautiful, wild, remote, untouched place."

Restoring the Chandeleur Islands has been a tough sell. Seventy-five miles (121 km) from New Orleans, they are far from people's houses, and restoration money is typically reserved for rebuilding barrier islands that would create an actual barrier.

For example, two islands closer to the mainland have been completely rebuilt by the state under the Coastal Wetlands Planning, Protection and Restoration Act (CWPPRA). A third project at East Grand Terre, 50 miles (80 km) from New Orleans, will be the largest barrier island restoration project to date, rebuilt under the Coastal Impact Assistance Program, at a cost of $31 million.

But building these islands back up won't guarantee their long-term survival; scientists say that if the reconstructed islands are to last, coastal engineers must reconnect them to the silt-providing Mississippi.

The barrier islands built by the Mississippi River no longer receive a healthy dose of sediment to create new marshland. Because of dams and other diversions of the river, sediment that would replenish the islands is lost to the Gulf of Mexico at an average rate of 120 million tons (109 metric tons) per year, which is the major reason why the islands are slowly sinking and eroding. Not enough sediment is coming in to replace what tides and storms are washing away.

"We've starved the system of sediment so much that, for any chance at being rebuilt, we have to rebuild them," said Chris Macaluso, spokesperson for the Louisiana Wildlife Federation, a non-profit conservation group.

River sediments are also the lifeblood of coastal wetlands in the Gulf. Like the barrier islands, these wetlands were devastated by Katrina; hundreds of square miles were lost during the storm.

"The marshlands to the east of the Mississippi Delta were really hammered," said ecologist Harry Roberts of Louisiana State University in Baton Rouge.

A healthy marsh acts much like a barrier island, blocking storm surges while also creating areas for fish to spawn and birds to nest. As sediments pile up in the wetlands, rich soil forms, and plants and other vegetation take root and keep the marsh's head above water. So when you walk on a healthy marsh, you are actually walking on the roots of plants.

Distinguishing between the marshland damage from Hurricane Katrina and the damage from Hurricanes Rita, Ivan and Gustav (all of which struck within four years) is tricky. According to the USGS, the area of wetlands lost from all four storms totaled 340 square miles (881 sq. km). Katrina and Rita alone destroyed 220 square miles (570 sq. km) — an area nearly 10 times the size of Manhattan.

Intense storms typically blow away all the vegetation and soil from a marsh, leaving behind a giant body of water. Katrina was no exception.

At the White Kitchen Preserve near the Pearl River, a floating marsh that took hundreds of years to form was "just shoved to the north like an accordion," said Nelwyn McInnis, program manager for the north shore field office of the Nature Conservancy, a non-profit conservation organization. "It's still a lake to this day."

The Mississippi Delta marshes suffered the most damage because they, like the barrier islands, were already ailing prior to the storm because their source of sediment has been blocked off. Since 1900, some 1,900 square miles (4,900 sq. km) of wetlands in coastal Louisiana have been lost — an area the size of Delaware — at rates of as high as 39 square miles (100 sq. km) per year.

Katrina simply accelerated the disappearance, which makes restoration all the more daunting.

CWPPRA projects are slowly nursing the area back to health. In 2008, workers began "plugging" 400 acres (0.6 square miles, 1.6 sq. km) of new marsh in Big Branch, with the goal of creating another 1,400 acres (2.2 square miles, 5.7 sq. km). Plugging refers to filling the open water with sandy and muddy vegetation.

"We're rushing nature up to get vegetation so it won't erode away from some other storm," said Daniel Breaux, refuge manager at Big Branch Marsh National Wildlife Refuge.

Recovery of the marshlands has not been easy to measure, said University of New Orleans' Reed. These wetlands were not sitting still before Katrina and they have not been still since. Oil spills, more hurricanes and man-made levees constantly mold the coastal wetlands. The ecosystem that emerges from any rebuilding will never be like it was before.

"This is the tale of coastal Louisiana; something is always happening," Reed said in a telephone interview. "It's very dynamic. Really what happens is that when we lose a marsh, it's gone — unless we take deliberate regenerative action."

Katrina also took its toll on the Gulf Coast's tree population, with more than 320 million trees killed to the east of New Orleans during the storm, according to a 2007 study.

At White Kitchen Preserve, a flyover two weeks after the storm showed the bottomland hardwood forests looking like "matchsticks laying on the ground," said the Nature Conservancy's McInnis.

Yet, there are signs that these forests are bouncing back — even regrowing vigorously, said Jeffrey Chambers of Tulane University, a member of the research team on the 2007 report. Chambers recently revisited the study site and was shocked by the new growth.

"It was one of the most exhausting hikes I've ever been on in my life," Chambers said. "It's just so difficult to move through because of the incredibly dense vegetation."

Katrina didn't just knock down trees, though, it also created a window of opportunity for invasive species to restructure the forests. Trees like the Chinese tallow are now thriving, Chambers said, which is "a sign of a new ecosystem in the making."

Despite the destruction they wreak, hurricanes are part of the natural life of a Gulf Coast forest. The forests have grown up with storms hammering them every so often, and the storms help clear out the old trees to make way for younger ones. Aside from destroying wildlife habitats, the loss of forest cover could have a lasting impact on the carbon dynamics of forests, said ecologist Rattan Lal of Ohio State University.

As long as there have been hurricanes in forests, trees have been dying. For old forests like the Amazon, however, the carbon soaked up by trees roughly balanced out the carbon released when the trees died and decomposed.

Most of the forests hit by Katrina were relatively young due to a century of logging. These forests are a "slow sink," Chambers said. They slowly pull the carbon out of the atmosphere, but quickly release it when they die.

"I would suspect that those sites hit by Katrina are carbon sources, and their peak in carbon loss is about right now," Chambers said.

If storms like Katrina become more frequent in the future — as some scientists predict — and they kill millions of trees each time one hits land, the carbon uptake and release dynamic would be tipped in favor of carbon being lost from forests. A weakening of forests would be equivalent to upping emissions, Chambers said.

Restoring the forests could potentially keep that carbon loss in check, Lal said. "We certainly cannot spend enough; they have to be restored," Lal said. "It's a long-term solution, not something you can show tomorrow."

Brett Israel is a staff writer for OurAmazingPlanet, a sister site to LiveScience.