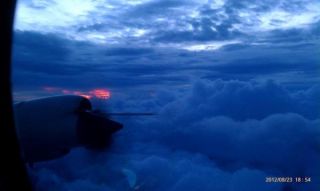 Sunset inside the storm: An image taken from a research plane on the evening of Aug. 23.
(Image: © NOAA Aircraft Operations Center.)

All eyes are on Tropical Storm Isaac as it barrels across the Caribbean toward Florida, where it could make for a soggy Republican National Convention next week. Yet amid all the speculation, a handful of Americans have already gotten up close and personal with the much-discussed storm.

Crews with the National Oceanic and Atmospheric Administration (NOAA) have been flying inside Tropical Storm Isaac, gathering data aboard specially outfitted aircraft.

The P-3s, based at MacDill Air Force Base in Tampa, Fla., are tasked with flying into the roiling hearts of hurricanes and tropical storms to gather information on wind speed, temperature, moisture levels and other conditions to help researchers refine their understanding of the inner-workings of these powerful storms.

Since Tropical Storm Isaac has lingered over Atlantic and Caribbean waters this week, NOAA's storm-swarming teams have been flying out of a support airfield in Barbados.

During an investigative flight that took off from the tiny island nation this morning (Aug. 24), the P-3 crew captured yet another stunning view from their flying laboratory: the frail glimmer of sunrise piercing Isaac's thick clouds.

The storm is now packing top sustained winds of 60 miles per hour (95 kilometers per hour) and is creeping west-northwest at about 14 mph (22 kph), according to the latest update from the National Hurricane Center.

Isaac is the ninth named storm of the 2012 Atlantic hurricane season, and the fifth to appear in August alone. Tropical Storm Joyce, the sixth named storm to appear this month, has already fizzled.

Isaac is expected to intensify, and could be near hurricane strength when it hits the island of Hispaniola later today. Forecasters say the storm will continue its progress to the northwest, passing over Cuba, and nearing Florida on Sunday and Monday.