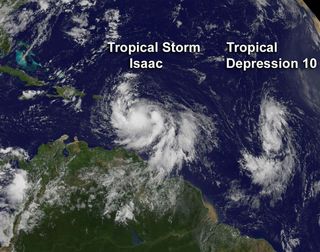 Tropical Storm Isaac, the ninth named storm of the 2012 Atlantic hurricane season, was christened only yesterday (Aug. 21), but already the storm is a movie star.

An animation made from satellite images captured Aug. 19 through Aug. 21 shows the storm's birth — a rough patch of clouds moves into frame, organizes itself into a rotating mass and begins to head toward land.

Officials at the National Hurricane Center in Miami named the storm at 5 p.m. local time yesterday, once Air Force hurricane-hunting aircraft flying through the storm confirmed that its sustained winds topped out at 40 miles per hour (65 kilometers per hour), nudging the storm over the 39-mph (63-kph) threshold required for tropical storm status.

After a weeks-long lull, storm activity has dramatically ramped up in the Atlantic basin during the month of August, which has seen five named storms so far.

And there may be another named storm on the way.

Out of frame in the video, but nipping at Tropical Storm Isaac's heels, is a storm system known as Tropical Depression 10. That storm system is packing winds of 35 mph (55 kph) and is expected to become a tropical storm later today (Aug. 22).

If that happens, the gale will be named Tropical Storm Joyce.

A static satellite image captured the two storm systems — both Isaac and Depression 10 — side-by-side as they swirled over the Atlantic Ocean early today.