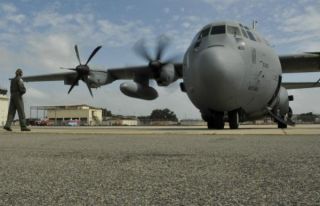 At the first sign of threatening weather, pilots take to the skies. The first engine of a hurricane-hunting WC-130J spins up.
(Image: © U.S. Air Force, Tech. Sgt. James B. Pritchett.)

A massive WC-130J aircraft arrived in the suspicious region of clouds and choppy water around 3 p.m. ET. About an hour later, the crew sent word they'd spotted the telltale signs of a developing storm winds were coming from all four directions.

Before 5 p.m. ET, the National Oceanic and Atmospheric Administration (NOAA) had issued an advisory. Tropical Storm Don was over the southern Gulf of Mexico with maximum sustained winds of 40 mph (65 kph), heading northwest at about 12 mph (19 kph).

Borsi said the storm-chasing plane, about the size of a 737, was flying roughly 500 feet (152 meters) above the ocean surface, equipped with instruments (and the well-trained eyes of pilots and crew) that take invaluable data for storm forecasters.

If a storm develops over land, a network of sensory instruments such as Doppler radar sends useful information to meteorologists; but when a storm develops over the sea, forecasters can't get enough data to predict how a storm will behave, or even know exactly where it is. "So we have to be Johnny-on-the-spot to give them that data," Borsi told OurAmazingPlanet.

Although Don is just the 2011 Atlantic season 's fourth named storm, Borsi said hurricane hunters have already flown between five and 10 missions into rough weather this year, from their operations hub at Keesler Air Force Base in Biloxi, Miss.

"As long as a storm is threatening landfall, and threatening people and property, we fly," Borsi said even if those people live outside the United States.

The weather reconnaissance unit, at the behest of the National Hurricane Center in Miami, sends planes to investigate storms that threaten the Caribbean, Canada, Central America and other spots beyond U.S. jurisdiction.

Since the flights can be long, there are usually three pilots on board, and two additional crew members. On a typical mission, a plane flies two or three hours to reach a storm and, once there, spends about six hours bouncing around inside it.

"Take a roller coaster ride through a car wash, add extreme turbulence, like you're holding onto a jackhammer, and add lighting, tornadoes," Borsi said. "We get some pretty wild rides. I love roller coasters."