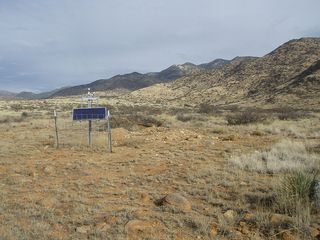 A seismometer in southeastern Arizona. From 2006 through 2009, nearly 1,000 earthquakes rattled the state.
(Image: © Incorporated Research Institutions for Seismology (funded by NSF EarthScope))

Arizona: the land of a thousand quakes?

From 2006 through 2009, nearly 1,000 earthquakes rattled Arizona, showing the state is more seismically active than thought, according to a new study based on the readings of an array of seismometers installed by Arizona State University researchers.

The array provided the first opportunity to study seismicity on a statewide scale, according to a university statement.

Most of the quakes were small: Ninety-one percent were magnitude 2 or smaller, which aren't usually felt by humans. But they're still important to catch because geologists use them to map otherwise hidden faults beneath the surface. These "micro-quakes " also may signal an area is likely to produce a larger temblor.

"It is significant that we found events in areas where none had been detected before, but not necessarily surprising given the fact that many parts of the state had never been sampled by seismometers,"  study author Jeffrey Lockridge, a graduate student, said in a statement. "I expected to find some earthquakes outside of north-central Arizona, where the most and largest events had previously been recorded, just not quite so many in other areas of the state."

Arizona isn't known for large earthquakes. The largest ones recently were a pair,  magnitude 4.9 and 5.3, that occurred in 1993 in the Cataract Creek area outside of Flagstaff.

The new earthquake measurements are detailed in the August issue of the Bulletin of the Seismological Society of America.