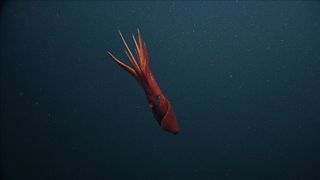 Much like lizards that ditch their tails in a tussle, some deep-sea squid can sacrifice their glowing arms to distract enemies and swim to safety. Scientists observed this defense mechanism first-hand in the foot-long octopus squid (Octopoteuthis deletron) off the coast of California.

"If a predator is trying to attack them, they may dig the hooks on their arms into the predator's skin," said University of Rhode Island researcher Stephanie Bush. "Then the squid jets away and leaves its arm tips stuck to the predator. The wriggling, bioluminescing arms might give the predator pause enough to allow the squid to get away."

Setting out to answer why many octopus squid have arms of different lengths, Bush and her team deployed a camera-equipped remotely controlled vehicle in the undersea Monterey Canyon and prodded a squid with a bottlebrush.

"The very first time we tried it, the squid spread its arms wide and it was lighting up like fireworks," Bush said in a statement from the University of Rhode Island. "It then came forward and grabbed the bottlebrush and jetted backwards, leaving two arms on the bottlebrush. We think the hooks on its arms latched onto the bristles of the brush, and that was enough for the arms to just pop off."

Though the squid eventually re-grow their severed arms, the strategy might seem extreme. Bush notes that there is "definitely an energy cost associated with this behavior, but the cost is less than being dead." [See Cool Photos of Squid]

During later experiments, Bush found that some of these deep-sea squid seemed hesitant to let go of their limbs, while some did so after being poked several times, according to the statement. She also tested seven other squid species for the defense strategy and found that none of them jettisoned their arms.

The results of Bush's experiments were published in the July 2012 issue of the journal Marine Ecology Progress Series.

Past research on the octopus squid found they have another ingenious ability: In the deep, dark waters where the squid live, meeting a mate is tough, and when they do come across their own species, the deep-sea gloom means it's tough to tell a gal from a guy. The octopus squid's workaround? They simply mate with any octopus squid that crosses their path.