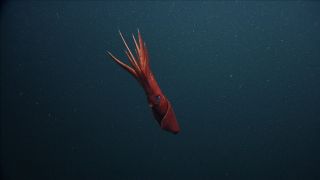 A female Octopoteuthis deletron in the water column observed by MBARI’s remotely operated vehicle Ventana on December 6th 2007. The photophores on the arm tips are visible. This animal was observed at 854 meters depth in Monterey Canyon. Spermatangia were present on the dorsal arms. They are visible as white dots.
(Image: © ©2007 MBARI)

Meeting girls is tough if you're a male squid living in the deep, dark waters off the coast of California. You may run across your own species only rarely — and when you do, the deep-sea gloom makes it hard to tell whether your new pal is a guy or gal.

But one squid species has come up with a work-around to this matchmaking problem, a new study finds. The eight-armed lotharios simply mate with any squid of their species that crosses their path. If that means wasting some sperm on male-to-male matings, the squid don't seem to mind.

This same-sex squid behavior can't necessarily be taken as more evidence of homosexual bonding in the wild, according to study researcher Henk-Jan Hoving, a postdoctoral researcher at the Monterey Bay Aquarium Research Institute in Moss Landing, Calif. Rather, the squid seem to mate indiscriminately out of necessity.

"In addition to the dark habitat the animals live in, the animals only reproduce once, encounters with partners are few and far between, and mating is probably rapid," Hoving wrote in an email to LiveScience from a research vessel off the U.S. West Coast. "We think the high frequency of male matings is the result of a combination of all the above factors." [Top 10 Swingers of the Animal Kingdom]

The squid in question, Octopoteuthis deletron, is a medium-size creature whose body can grow to about 6.5 inches (17 centimeters) long. Little is known about the squid's life cycle, because O. deletron is relatively rare, and its deep-sea habitat hardly invites observation.

But by using remotely operated vehicles, scientists were able to capture images of 108 O. deletron squid in the Monterey Submarine Canyon off California's coast between 1992 and 2011. The squid were cruising waters from 1,300 to about 2,600 feet deep (400 to 800 meters).

For many of the animals, the footage wasn't clear enough to determine the squid's sex. But 39 of the squid could be sorted into male and female. It was here that Hoving and his colleagues made a curious discovery: The same number of male and female squid showed evidence of a recent amorous run-in with a male. [See images of squid]

This evidence took the shape of spermatangia, little sacs of sperm that male squid deposit onto the female during mating. These packets inject sperm into the female's body. The packaging remains attached to her skin, signaling she has mated recently.

The packets were placed in areas out of the reach of the males' own penises, suggesting they hadn't accidentally inseminated themselves. More likely, Hoving and his colleagues wrote, is that it's simply less costly for squid to waste some sperm on same-sex mating than it is to evolve elaborate courtship behavior to pick out fertile females.

The squid live solitary lives, Hoving and his colleagues wrote, and may run into members of their species only rarely. Thus it may make sense to grab any chance to mate.

Little is known about the deep-sea squid lifestyle, Hoving said, so it would be useful to do DNA testing on sperm packets to find out how many males are mating with females and males. Beyond that, he said, much about the species is a mystery. He and his colleagues are currently trying to find out how long O. deletron lives.