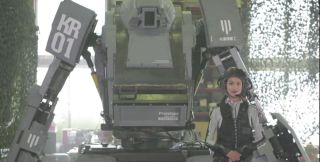 Dreams of piloting a huge fighting robot could become reality for anyone with $1.35 million to spend on a "Kuratas mecha" made in Japan. Human pilots can not only control the 13-foot-tall goliath from inside or outside, but also fire a BB Gatling gun by simply smiling or laughing maniacally inside the cockpit.

The new Kuratas robot bears an eerie resemblance to the alien mech warrior from the film "District 9" with its head, twin arms and assort of possible weapons ranging from the gatling gun to a water rocket launcher. A diesel engine powers it to a top speed of 6 mph (10 kilometers per hour), acccording to a new video posted on July 28.

The Kuratas robot that seems to have evolved from an earlier mecha prototype called Vaudeville made by Suidobashi Heavy Industry. Several other new videos show how Kuratas, the vision of iron worker and artist Kogoro Kurata, made its debut at Wonder Fest 2012, according to the robot blog Plastic Pals.

Suidobashi Heavy Industry designed the robot so that humans can control it with cockpit controls, issue commands on a smartphone, or even use motion control technology similar to Microsoft's Kinect for the Xbox video game console. Some facial recognition technology also seems to be behind the "smile shot" feature.

Buyers with deep pockets can go to the Suidobashi Heavy Industry website, scroll to the bottom and click "Buy Dream Now" to choose the mech's weapon accessories, paint color and pilot seating options — add-ons to the starting price of $1,353,500.