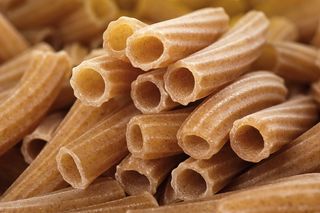 Pasta has been unjustly vilified in recent years as a leading culprit in the rise of obesity around the globe. It has been attacked as a (gasp!) carbohydrate, a food type many health experts say we should avoid.

The obvious problem with this assessment is that pasta is a traditional food that predates the emergence of the obesity and diabetes pandemics. And in Italy — pasta central, where pasta is eaten on average at least once a day — the denizens benefit from one of the lowest rates of obesity in Europe, if not the world.

The truth is, pasta is and has long been a healthy carbohydrate and a central component of the Mediterranean diet, broadly considered one of the best lifestyle diets for maintaining a healthy weight.

How did pasta get such a bad rap? The primary reason is a simple misconception — that pasta is akin to bread made from wheat. In fact, pasta is made from durum, a wholly different species from bread wheat in that it contains a third fewer chromosomes. Durum is an older species and a hybrid of wild grasses; modern bread wheat is more domesticated.

The second reason why pasta gets criticized is what we tend to do to it: over-process it and top it with salty and fatty goo. This is what has turned inherently healthy pasta into something far less desirable. [10 Bad Things That Are Good for You]

The history of pasta is as long and tangled as poorly cooked linguine. The general consensus is that something like pasta made from semolina, the flour of durum, was eaten throughout the Mediterranean region as early as Roman times.

Pasta as an Italian staple likely developed in the 12th century. Soon after, in the Naples region, the locals developed a way to mass-produce dried pasta, which allowed for long-term storage and indeed helped to enable extended sea voyages.

Pasta has changed little over the last 800 years. In Italy, it was traditionally the food of peasants, which meant just about everyone. Before the introduction of tomatoes from the New World, pasta was served with olive oil, garlic or local vegetables.

What makes pasta healthy is the fact that it has a low glycemic index (GI) — a modern concept of how fast glucose, a sugar from carbohydrates, is absorbed into the bloodstream. The GI runs from zero to 100, and foods with a higher index number tend to spike the blood with sugar. This taxes the organs — in particular, the pancreas — and can lead to diabetes and obesity.

There are several reasons for pasta's low GI rank, according to Francesco Pantò, director of product development at the Barilla Group in Parma, Italy. Semolina flour comprises large, crystal-like yellow particles. Its naturally strong gluten content prevents starch from leaching out quickly, and this in turn leads to slower digestion, slower release of sugar into the blood, and a greater feeling of satiation, Pantò told LiveScience.

Also, the extrusion process — in which the unleavened semolina dough is pushed through a die to give pasta its shape — additionally creates "very compact structure, which makes the carb slowly available [in the body], hence determining a slow energy release," Pantò said.

Whole-grain semolina pasta, a recent trend, does not necessarily have a lower GI, Pantò said. Rather, the whole grain adds micronutrients lost in the milling process, which can be important but is outside of the discussion of weight gain. [8 Reasons Our Waistlines Are Expanding]

The good, the bad, the mushy

Researchers continue to confirm the healthful benefits of keeping pasta central to a diet. Pregnant women in the Netherlands who ate a pasta-centric Mediterranean diet gave birth to healthier and higher-weight babies compared with women who ate more meat and potatoes, as reported in February this year in the British Journal of Nutrition.

Researchers in United States found that eating salad with pasta combined to produce a feeling of fullness with fewer calories. Those results were published in February in the journal Appetite. And in the journal Critical Reviews in Food Science and Nutrition in January, researchers in India suggested that bringing more pasta to their country, supplemented with iron and other nutrients, could combat nutritional diseases and undernourishment.

If Italy has an obesity problem, it is with its children. The rate of child obesity there mirrors the United States, with about one-third of children overweight. Studies find the reason to be a departure of the traditional diet — with more meat and ultra-processed foods, such as fast food and prepared foods — and a lack of exercise.

Pasta, Pantò said, should be cooked al dente, or slightly firm. Anything longer slightly raises the GI. Pasta becomes unhealthy when it is overly processed, such as the mushy stuff in a can, or when it is topped excessively with fatty meats and cheeses.

And pasta should be consumed, as with everything, in moderation, a concept sometimes lost on Americans. Italian portions, although daily, tend to be smaller than American portions. Thus, the Mediterranean diet does make room for those meats and cheeses.

As journalist and social critic H.L. Mencken wrote, "For every complex problem there is an answer that is clear, simple, and wrong." Avoiding all carbohydrates such as pasta just because they are carbohydrates seems to fit this notion.