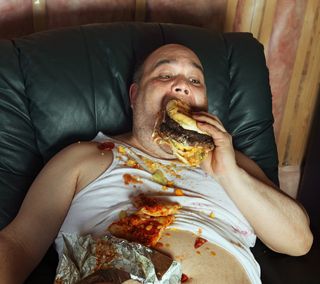 WASHINGTON — Brainpower is more important in dieting than scientists realized — not just in battling cravings but in physically changing the body's reaction to the intake of food, according to a new study.

Whether or not we consider a food to be healthy has a big impact on a protein our bodies release to control metabolism and appetite, a researcher discovered. Participants who thought they were drinking a calorie-packed shake showed much greater and quicker spikes in a gut hormone, making them feel full faster, than those who were drinking what they thought was something healthier.

"When you are dieting, you want to eat fewer actual calories, but the mind-set of 'Okay, I've got to eat sensibly, I've got to eat low-fat,' ... regardless of what you are eating, is actually countereffective," study researcher Alia Crum of Yale University said. "It's telling your body, 'I'm not getting enough,' which relays back to your brain, 'I'm not getting enough.'"

At three times during the taste test  (before the test, after seeing the label and after drinking the shake) the researchers sampled the participants' blood, testing it for a protein called ghrelin, a gut hormone that plays an important role in appetite. In general, before eating, when you are hungry, ghrelin levels increase. They drop when the gut senses food; the quicker these levels drop,  the quicker you start to feel full. So the less ghrelin you have, the less you want to eat.

Crum found that when participants imbibed the "indulgent" shake, ghrelin levels dropped much quicker than when they downed the shake labeled healthy. This was surprising since the shakes actually had the same caloric and nutritional content, Crum said.

"When they were consuming the shake in the mind-set of indulgence, they had a steeper rise in ghrelin before consuming the shake, which was followed by a significantly steeper response after," Crum told LiveScience. "This mitigating response in ghrelin is better for you, in the sense that you will feel more full and your metabolism will speed up; you are less likely to gain weight."

The finding suggests that when people eat diet or health foods (something labeled low-calorie or low-fat), their bodies respond differently than when they indulge in seemingly unhealthy foods. This could mean they take in more calories from healthy foods.

This is one of the first studies to determine the body's physical response to a person's mind-set when consuming food. These same mind-body interactions could affect other bodily responses to foods, including other metabolism-related hormones, Crum said.

Crum said it had been thought the calorie and nutrient content of food was what triggered the amount of ghrelin released. "What we thought was that this was sort of a signal that once you had food in your body, then it secretes ghrelin, and the ghrelin levels signal to the brain," she said. "We didn't know you could mentally regulate it."

Crum presented her findings May 28 at the Association for Psychological Science conference. They appeared in a paper published in Health Psychology on May 16.