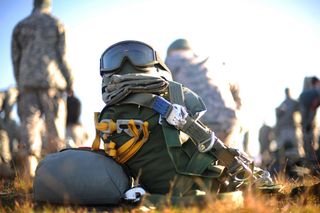 Battlefield brain trauma may hold hard-won lessons for American football as well as the U.S. Army. That realization has compelled the National Football League to order military-grade helmet sensors so that it can better monitor the health of football players who take a big hit on game day.

The Army created its helmet sensors to detect concussive blows that may cause brain injuries — hidden damage that often goes undetected by physicians or soldiers. Such helmet sensors not only record data about the force of different battlefield blasts caused by roadside bombs or rocket-propelled grenades, but can also send out their own report to Army medical experts.

"The NFL is very interested in having a similar type of capability that would aid doctors in diagnosing and understanding football players' experience of concussions and blunt force trauma on the football field so that they can better offer medical aid at the appropriate time to those players," said Lt. Col. Frank Lozano, product manager of soldier protection with Program Executive Office Soldier.

Brain injuries among soldiers and athletes often have eerie resemblances. Military members who endure battlefield blasts risk ending up with the same degenerative brain disease seen in professional athletes who take repeated blows to the head. That brain disease was found in the brain of former National Football League star Dave Duerson, who killed himself in 2011.

"In the Department of Defense, there are more than 2,000 documented cases of brain injuries, and of that number 58 percent are Army," said Stephanie Maxfield Panker, traumatic brain injury (TBI) program manager for the U.S. Army. "We have large numbers of soldiers who are exposed to injuries in the field, training accidents, especially with what the Army does in particular."

Army and NFL officials meet every now and then to compare notes about preventing and treating traumatic brain injury. The Army plans to help the NFL modify its helmet sensors for use on the playing field rather than the battlefield.

The Army has already sent about 10,000 helmets to its overseas troops and ordered a total of 45,000 helmet sensors. But the NFL's renewed interest may soon lead to a new batch of orders.

"A lot of soldiers are football fans and a lot of football players and teams in the NFL are large supporters of the armed forces," Lozano said. "So it's kind of a natural fit."